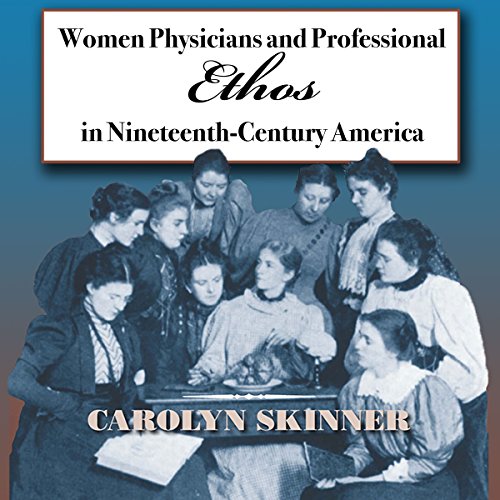 Studies in Rhetorics and Feminisms
By: Carolyn Skinner
Narrated by: Caroline Miller
Length: 8 hrs and 34 mins
Categories: History, American
3 out of 5 stars 3.0 (3 ratings)

Women physicians in 19th-century America faced a unique challenge in gaining acceptance to the medical field as it began its transformation into a professional institution. The profession had begun to increasingly insist on masculine traits as signs of competency. Not only were these traits inaccessible to women according to 19th-century gender ideology, but showing competence as a medical professional was not enough. Whether women could or should be physicians hinged mostly on maintaining their femininity while displaying the newly established standard traits of successful practitioners of medicine.

Women Physicians and Professional Ethos provides a unique example of how women influenced both popular and medical discourse. This volume is especially notable because it considers the work of African American and American Indian women professionals. Drawing on a range of books, articles, and speeches, Carolyn Skinner analyzes the rhetorical practices of 19th-century American women physicians. She redefines ethos in a way that reflects the persuasive efforts of women who claimed the authority and expertise of the physician with great difficulty.

This is definitely an academic essay. I was impressed by the amount of research Skinner did for this book. The research is both comprehensive and exhaustive. Skinner exams women’s medical text and speeches from the 19th century from “a range of genres appropriate to the women’s status as physicians,” and is most interested in their strategic uses of ethos in their efforts to influence popular and medical discourse.

The genres were divided into chapters with the first chapter covering the debate of the time about the character of women physicians. Skinner covers questions such as could women physicians not only be competent but maintain their femininity. Other chapters were on education of women and children on anatomy, sex and hygiene.

I was most impressed that the author also included American Indian women and African American professionals and their special difficulties to be accepted.

Skinners claims in each chapter are based on solid textual analysis with her support anchored in the choices.

This is an excellent analysis and review of the problems women faced to be educated and accepted in their profession of choice. It is only recently that we are seeing more and more women physicians and in the most part they are not only accepted as competent physicians by fellow physicians but also by the public.


5 of 5 people found this review helpful