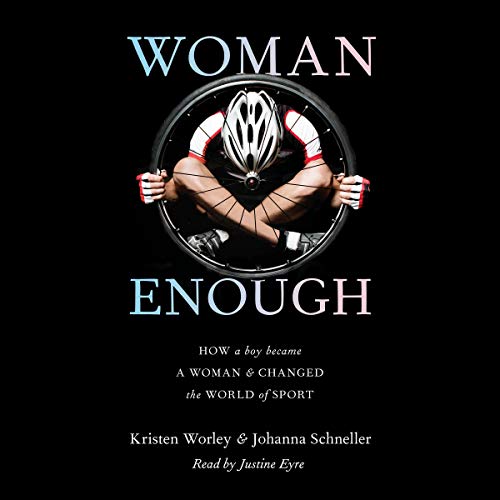 How a Boy Became a Woman and Changed the World of Sport
By: Kristen Worley, Johanna Schneller
Narrated by: Justine Eyre
Length: 5 hrs and 59 mins
Categories: Biographies & Memoirs

By: Kristen Worley,Johanna Schneller
Narrated by: Justine Eyre
Free with a 30-day trial

A powerful and inspiring story of self-realization and legal victory that upends our basic assumptions about sexual identity.

In 1966, a male baby, Chris, was adopted by an upper-middle-class Toronto family. From early childhood, Chris felt ill at ease as a boy and like an outsider in his conservative family. An obsession with sports - running, waterskiing, and cycling - helped him survive what he would eventually understand to be a profound disconnect between his anatomical sexual identity and his gender identity. In his 20s, with the support of newfound friends and family and the medical community, Chris became Kristen.

Chris had been a world-class cyclist, and now Kristen aspired to compete in the 2008 Beijing Olympics. She became the first athlete in the world to submit to the International Olympic Committee's gender verification process, the Stockholm Consensus. An all-male jury determined she fit their biological criteria - but the IOC ultimately objected to her use of testosterone supplements. They, and other sports bodies, regard them as performance-enhancing, when in fact all transitioned female athletes need the hormone to stay healthy and to compete. So Kristen filed a complaint against the sports bodies standing in her way with the Ontario Human Rights Tribunal. And she won.

Woman Enough is the account of a human-rights battle with global repercussions for the world of sport; it's a challenge to rethink fixed ideas about gender; and it's the extraordinary story of a boy who was rejected for who he wasn't and who fought back until she found out who she is.

“Kristen Worley’s story not only sheds light on transgender issues in sport, it also illustrates the struggle and complexity of her experience becoming her authentic self. I not only feel better educated after reading Woman Enough, I feel a greater respect and empathy towards all individuals going through a gender transition.” (Silken Laumann, author of Unsinkable)

“Woman Enough shows the intriguing, brave and personal struggle of Kristen Worley who, as a fully transitioned XY woman, did not fit into the male/female binary system used in sports. At the cost of her own athletic career, she has fought the systematic ignorance that has caused so much damage to many athletes. She has relied on science to advocate that variety has been the motor of evolution, that diversity will thus always be present, and that this biological fact is also true for gender identity. In this fascinating book we see her breaking through barriers and dismantling assumptions about gender. Her efforts will be of tremendous importance for diverse people not only in sports, but everywhere in this world.” (Dick F. Swaab, MD, PhD, professor emeritus, University of Amsterdam)

What listeners say about Woman Enough