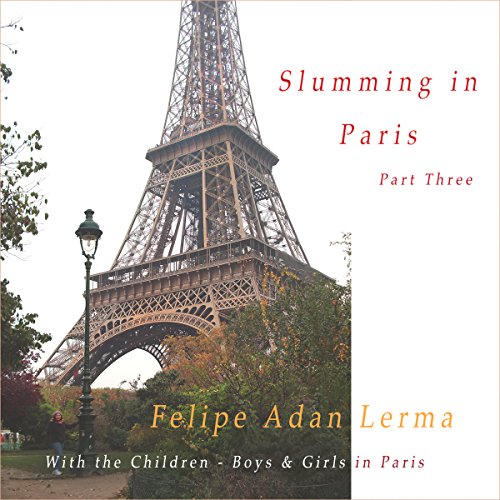 With the Children - Boys and Girls in Paris

By: Felipe Adan Lerma
Narrated by: Paul Woodson
Try for $0.00

Six children, ages nine through "almost" eighteen, have arrived in the City of Light, Paris.

Arthur and Gricinda, two of the children's parents, already having spent a romantic week alone in Paris, have received their arrival like flood gates at the ready. Their reserved hotel rooms still aren't ready, and they continue to settle into, and enjoy the lights and sights of Paris, from three tiny furnished apartments side by side.

But the two adult guardians have trips and experiences planned, and gird themselves for the unknown. And the older two children do take the younger four out for excursions. Which creates its own challenges.

Arthur and Gricinda have their hands full.

And it's all worthwhile.

Part Three of my "Slumming in Paris" Series.

Part 3 is the second of seven novellas forming a subset with "Slumming in Paris," additionally titled, "With the Children."

Further, an identifying title "Part" is given to each of the seven in the "With the Children" series. This book is "Boys and Girls in Paris." The story continues with the children, and the adults beginning to more and more interact with the city of Paris, particularly the younger children.

Parts 2 through 8 are comprehensive, with an over-arching theme and story of experiencing Paris, and finding what that experience means within. While Part One, "Slumming in Paris, Arthur and Gricinda" is more obviously focussed on the two adults, Parts 2-8 prominently feature the children.

Experiencing Paris is, in this work, both symbolic, and an engulfing immersion all its own.

The mystery, for each person who visits this wonderful city, is how to individually reconcile everything they have known before, and hope to know. And to know, in this instance, because there are so many characters, mostly young, is a variable thing.