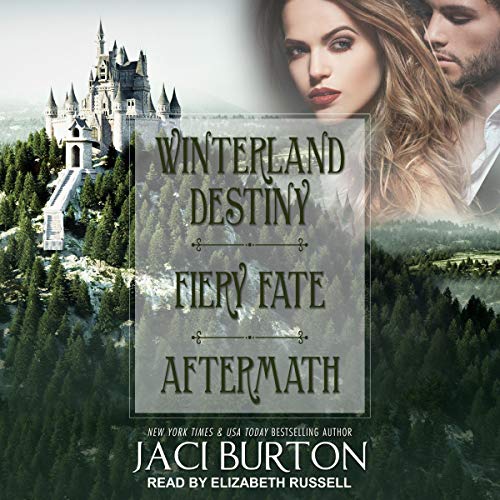 By: Jaci Burton
Narrated by: Elizabeth Russell
Try for $0.00

Winterland Destiny: Noele, Faerie princess of D'Naath, is destined to wed Garick, the Elvin king of Winterland. Their union will strengthen their territories against the evil wizards. Two hearts destined to be together must fight not only the evil wizards, but their feelings for each other.

Fiery Fate: Solara, faerie princess of D'Naath, is betrothed to a king she's never met. Visiting her sister, Noele, in Winterland, Solara's departure to the southern kingdom is imminent. But after a misunderstanding she must remain in Winterland with Roarke, the elvin warrior who stirs her blood like no other could. Though forbidden, their destiny is inevitable, searing them with a fiery love that cannot be extinguished.

Aftermath: Faerie princess Trista had the perfect plan - fool King Braedon of Greenbriar into thinking her sister, Solara would not marry him. Only the plan backfired and their father promised Trista to Braedon instead! Braedon is cold and barbaric, but within his outer shell of indifference lurks a man filled with passion. Trista intends to break his protective layers of ice until she uncovers the heat within him.