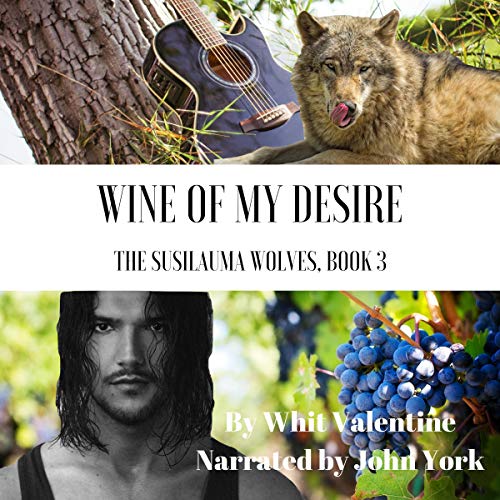 Wine of My Desire

By: Whit Valentine
Narrated by: John York
Try for $0.00

Jeremy is the quintessential homebody: He lives with his family, works from home, and doesn't even drive. He also doesn't think very much of himself after his failure to prevent his brother Daniel's injury. He is struggling to decide what to do with his life when fate drops a true mate right in his lap. Too bad even his mate can't see anything in Jeremy worth wanting.

Marcello is a longtime member of a shifters-only motorcycle club. When the club's president gets bad news from home, the whole group decides to come along and help. Upon arrival, Marcello can't figure out why one of the Jacobson-Miller men occupies so many of his thoughts.

When shifter hunters again target the Jacobson-Miller clan, Marcello will learn that Jeremy is far more special than he'd originally thought, but will he learn it too late?

What listeners say about Wine of My Desire

The Susilama wolves are back!

I completely fell in love with this book! I usually listen to audiobooks in my down time, but with this one, I just couldn’t stop listening!
This is probably my new favourite in the series! It is much more emotional than the previous two, because the mating does not goes smooth, and also we have the shifter hunters back (what’s wrong with you people, would you leave them alone???).
So this book made me laugh, it made me cry, and then laugh again.
And without giving away or spoiling anything, I will only say that Marcello in his shifted form is completely and utterly adorable!
The Jacobson-Miller clan is the perfect example of what a strong and united family/pack truly is. Strong bonds that transcend time, distance, illness and adversities. This series just keeps getting better and better, and I truly love John York’s narration.

Oh wow what a rollercoaster of emotions!!!

I have listened to this about 3 times in a week I love it!!! John’s voice is brilliant and really brought a fantastic book to life.

As we read in the last book, Jeremy met Marcello when Marcello came to susilama with Jeremy and Daniels brother. Jeremy recognises his mate instantly but Marcello ignores him!!! But why? Well that’s for you to find out in the book!! There is heartache for us as we go through a terrible ordeal with Jeremy and smiles as Daniel is there!! Yay I love Daniel!!!

This book had me angry, then crying, then laughing then sad and then giggling at the end!!! For those who have already read the book, the ending is even better read by John!!!

If you like shifter stories with a fantastic story line, strong characters and emotional overload then this is the series for you!!! John continues to do a fantastic job of voicing the characters. Although this could be read or listened to as a stand-alone I would recommend you start at the beginning, although didn’t like the narration on the first book, sorry John!! But please don’t be put off he totally nails it in book 2 and this one, can’t wait for the next book in this series.

I love Whit Valentine's books! They are SO good, and is and insta-buy for me. The story had both heartbreaking and heartwarming moments. In the beginning I really did not like Marcello very much, but he won me over in the end. Jeremy was a sweetheart, and I was rooting for him from the very beginning. John York is very good at narrating the Susilama books, and I love his performance. You do not feel like someone is reading the book to you, and his voices are so good that you are sucked into the story. I could not put the story down, and listened to it all in one day. I would definitely recommend this book if you like shifters and characters with depth.