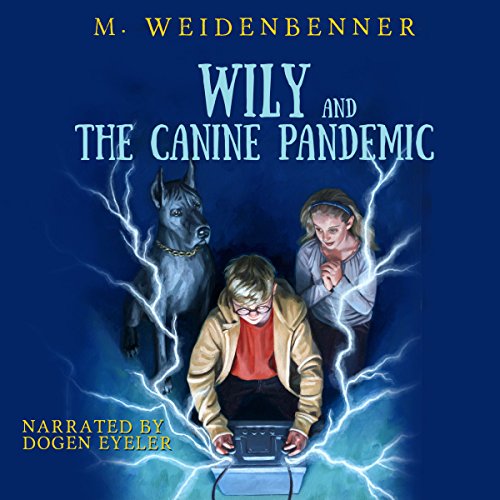 By: Michelle Weidenbenner
Narrated by: Dogen Eyeler
Try for $0.00

Dogs are dying in droves and scientists don't know why. Strange!

Eleven-year-old Wily has a super invention that could help, if only his parents would allow it. There's only one person who believes in Wily's invention, a strange girl with mind-hacking skills and spiraling eyes. When she kidnaps Wily. He finally has a team who believes in him.

But if he helps, he may never see his family again. But it he doesn't help, the canine race - all the poodles, labs, greyhounds and pugs - will die. It will be his fault.

It's dogs vs. family and Wily doesn't know what to do next.

What listeners say about Wily and the Canine Pandemic

A book for all children. This book has everything and then some. The narrator is absolutely awe inspiring. I want my young nieces and nephews to read this book. I received this audio book for free at my request and voluntarily reviewed.

My 8 year old son and I really enjoyed this story! The narrator did a really fantastic job telling this story. This was interesting and creative and we really loved listening to this one!

What an imaginative story. Wily was the perfect hero. The story flowed really well and the ending was perfect!

Dogen Eyeler did a fantastic job with the performance too!

Can Wily save the world's dog population?

First of all, I am well over the age of the target audience. But, that didn't stop me from listening to and enjoying this very entertaining book.

The author has a keen imagination and I loved her world building and character development. Wily is a typical nerdy kid, a little overweight, picked on by bullies and bespectacled. He loves science and is constantly conducting experiments.

The canine population is dropping like flies and nobody seems to be able to figure out why or how to stop it. When Wily's own boxer dies, he is desperate to do anything to save him. Will his scientific knowledge and black box be able to save Sport?

I won't go into a lot of detail, but this book has a lot of great things going for it: dogs, spacecraft, Centaurs, magic, mind-reading and so much more. The writing is great and I would recommend this for kids who are old enough to not be bothered by descriptions of dead dogs.

The narrator, Dogen Eyeler, was perfect for this book and really added a lot my enjoyment. I was given the chance to listen to this book by the narrator/author/publisher and all opinions expressed are my own.

This was a fantastic book! The characters were well thought out, interesting and relatable, like the main character Wiley who has a lot of depth as soon as you are introduced to him in the first chapter. The dynamic of mixing mythology and technology is an interesting blend that makes the world feel full, yet limit less! Overall, I really enjoyed this book and highly recommend it!