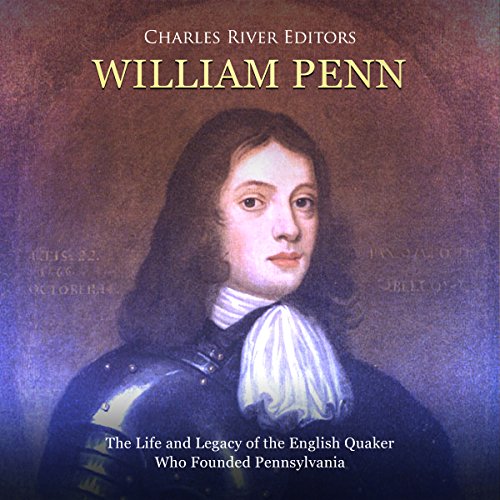 William Penn: The Life and Legacy of the English Quaker Who Founded Pennsylvania

"Sense shines with a double luster when it is set in humility. An able yet humble man is a jewel worth a kingdom." (William Penn)

Of all the original 13 colonies in America, only one owes its conception to one man, and indeed, Pennsylvania was and still remains bound up in the life and character of its founder, William Penn. Here was a man born into a military family who saw his father rise through the ranks of the 17th-century English court to become a friend of the king, and he even considered a military career for himself, only to leave it all behind to become a member of the "Society of Friends", known colloquially as the Quakers.

Few today know much about the Quakers. Whenever the subject of Quakerism slips into conversation, most picture a rosy-cheeked fellow in a simple black overcoat, and a wide brim hat atop his thick, cloud-white hair, inspired by the famous logo of the Quaker Oats company. In spite of the stereotype, Quakers today come in all colors, shapes, and sizes, with the more liberal folk sporting trendy haircuts, tattoos, and various piercings. They call themselves “Friends”, a starkly different but very devout following of God. They strive for a world empowered by peace and acceptance, an ambitious mission fueled by diversity, blind to race, gender, or creed.

As amicably harmless as the Friends might appear, there was once a time when being a Quaker was at the very best an instant conviction, and at the very worst a death sentence. Their unorthodox ideals were considered poisonous and potentially dangerous by authorities, who would fight time and time again to stamp out the flames of their movement, but still, they weathered storm after storm. And while the peace-loving followers of Christ were famed for their views of harmony, by no means were they feeble opponents. Not only would they persevere in the face of persecution, theirs was a movement so powerful that it stood strong for centuries, and much of that was due to William Penn’s work in North America.

For all his love of the sect and its plain ways, he was himself quite a scholar, able to debate some of the greatest minds of his age and win. He was also an ambitious man who saw the answer to his people’s persecution not in capitulation but in building a new society where all people could be free to worship God in the way each felt right. Along the way he befriended kings and scoundrels and suffered at the hands of each, only to triumph repeatedly, until finally he experienced what was, for the people of his faith, the ultimate triumph of death, knowing that the colony he had founded was thriving and would likely do so for generations to come.

William Penn: The Life and Legacy of the English Quaker Who Founded Pennsylvania chronicles the life of one of colonial America’s most important figures. You will learn about William Penn like never before.

What listeners say about William Penn: The Life and Legacy of the English Quaker Who Founded Pennsylvania

Loving the narration and very glad to think more about Penn. His words have changed my life.