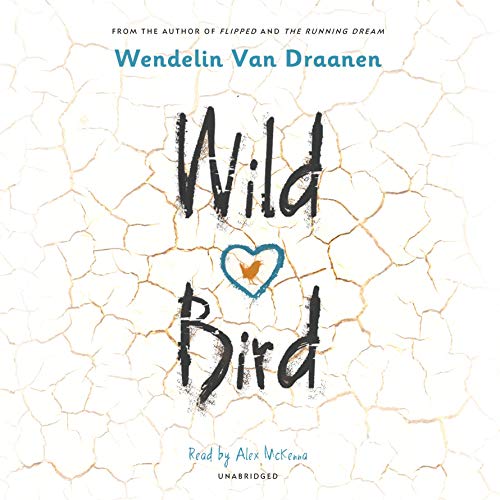 By: Wendelin Van Draanen
Narrated by: Alex McKenna
Try for $0.00

From the award-winning author of The Running Dream and Flipped comes a remarkable portrait of a girl who has hit rock bottom but begins a climb back to herself at a wilderness survival camp.

3:47 a.m. That's when they come for Wren Clemmens. She's hustled out of her house and into a waiting car, then a plane, and then taken on a forced march into the desert. This is what happens to kids who've gone so far off the rails, their parents don't know what to do with them anymore. This is wilderness therapy camp. Eight weeks of survivalist camping in the desert. Eight weeks to turn your life around. Yeah, right.

The Wren who arrives in the Utah desert is angry and bitter and blaming everyone but herself. But angry can't put up a tent. And bitter won't start a fire. Wren's going to have to admit she needs help if she's going to survive.

"I read Wild Bird in one long mesmerized gulp. Wren will break your heart - and then mend it." (Nancy Werlin, National Book Award finalist for The Rules of Survival)

"Wild Bird grabbed me by the wrist on page one - it's riveting." (Jenny Hubbard, author of And We Stay, a Printz Honor Book)

"Van Draanen's Wren is real and relatable, and readers will root for her." (Voya)

What listeners say about Wild Bird

So many challenges growing up these days. Mother nature is an incomperable teacher! This story includes some fiction, and some important truth.

This book was amazing, I think every young adult or teen should read this. Even parents! It was a fantastic book that is funny, makes you think, and just is over all one of my favorites.

A beautiful story of healing

#mystrangereading Wild Bird by Wendelin Van Draanen ⭐️⭐️⭐️⭐️⭐️ This story was moving, powerful and beautiful. I love how the audible worked in this stories favor because of the story-telling elements in Wren's journey. If you enjoy realistic fiction and stories about healing and finding your true self, this is definitely a read for you!

perfection on all fronts

The story was spot on and the narrator was perfect for this book. We've all read at some point a story of untoward teenager turning her life around with boot camp or something to that extent but this is so much more. Being told from 1st person really gives you the sense of what wren is going through from moment to moment and it was just very well done. And the actual details of the camp itself and the things that the girls go through there simply put you right there. 1st book by this author but won't be my last

This is a great book for getting a better understanding of what middle school/high school kids are going through and thinking. It's an educational book for parents and kids- definitely makes you think and analyze yourself and your relationship with your child. I wish we could all go to "prison camp" for 8 weeks and really discover ourselves.

OwO is a meme emoticon popular among role-players and furries. It is also well-known from popular copypastas where the writers use baby language to say some rather good stuff.

Yes! You must listen to this book!

This is one of those stories that captures your heart from the very first word. It is beautifully written and the reader is perfect.

I loved this book so much, I did not want it to end. Perfect Voice. Loved!

Loved it. Excellent narration and character development. Real...a must read for every teenager and parent of teens.