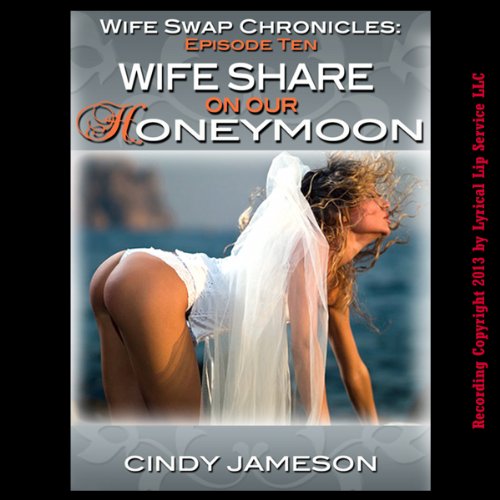 Wife Swap on Our Honeymoon

By: Cindy Jameson
Narrated by: Jennifer Saucedo
Try for $0.00

Sarah Greggor is back with the sexiest radio show in town, The Wife Swap Chronicles, and this time her guest is Brynne. Every girl expects to have constant and wonderful honeymoon sex, but who expects that it will turn into a wife share? Brynne tells her amazing and sexy story of her honeymoon in France and the wife swap that followed, and it all comes complete with her first lesbian sex!

I sat and blushed, not sure where to go after that. I was thankful when Aaron showed up with the drinks. We talked for a while, exchanging wedding tales and talking about the different things we had seen in France and where we were planning to go after this, and then Aaron got up to refill the drinks for a third time. And while he was gone, Clarissa got up and sat on the arm of the chair and leaned over and kissed me.

I was completely stunned. I had never been with a girl. I had never done any kind of sexual experimentation. Aaron was only my third boyfriend and we had never even talked about having another girl in our bed. Now, apparently, one wanted to make out with me. But then she got up and walked over to Aaron standing by the little minibar and left me with her husband.

James got up and walked over to me, and I'd be a liar if I said I didn't feel an attraction to him. His eyes alone pulled me in, but his body was the kind of tall, lean build that I was partial to, and he had the most beautiful smile.

When he got to me, he reached down and took my hands in his and pulled me up to stand beside him. Then, leaning down, he kissed me, softly, using his tongue to slowly part my lips and push inside. For a moment, all thought of Aaron slipped my mind and I leaned into James, feeling his hands on me and wanting to have more.

Then, my mind snapped back to reality and I pushed away. "I can't, you know I . . ." He smiled and pulled me close again and turned my head in Aaron's direction. I was shocked to see Clarissa with her arms wrapped around Aaron's neck and her head tilted upward, kissing my husband passionately. "You see," he whispered in my ear, "we want you both to have fun." With that, he turned me to him again and kissed me once more and I didn't fight the excitement that flooded my body.

What listeners say about Wife Swap on Our Honeymoon