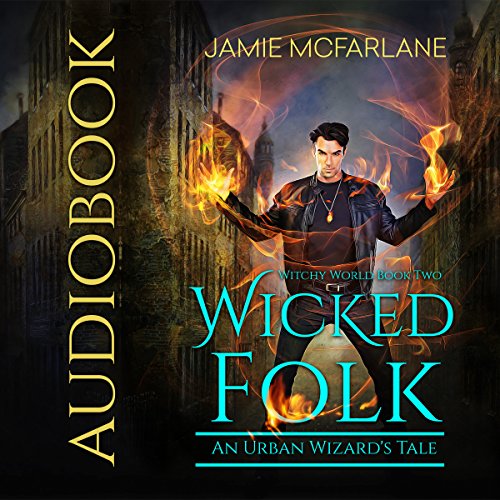 By: Jamie McFarlane
Narrated by: Lou Lambert
Try for $0.00

Late one night, a teenaged witch witnesses her uncle perform a forbidden ritual to summon a demon. His carelessness results in the demon breaking free and being released into the world. Drawn to the young witch's powers like a shark, the demon is only temporarily thwarted when she manages to escape.

Felix Slade is a wizard living far from the family he grew up with. Recently he's been unable to sleep as night after night a beautiful young witch is stalked by a demon in his dreams. Each night, new details are exposed and Felix is soon convinced that it's up to him to prevent the woman's demise. The dreams reach a critical point when Felix's own family is threatened by the violence he's sure is yet to come.

With his sister and the woman he loves by his side, Felix rushes to face the greatest challenge he's encountered yet. There is great darkness inside him and he must choose to embrace or reject it in order to face the demon's evil.

What listeners say about Wicked Folk: An Urban Wizard's Tale

A Solid Second addition to this world.

I really enjoyed this book. The story is solid and the emotional interactions between the characters are superb. My only issue is with the narration, sadly. I'm not sure that Mr. Porter's voice is the best for these characters. There are times when his narration comes across as wooden and it lessens the impact of dialogues. I still enjoyed the story overall and I look forward to the next installment!

I enjoyed the story and narration overall. There were points though where the volume was very uneven as well as points where the narrator clearly spoke the wrong word. Also, he did not seem familiar with the story he was reading based on the fact that he paused in odd places, such as in the middle of a sentence.

Great book, but the audio stability not so much

The is a great continuation of the first book. I enjoyed that we get to know more about the main character and his relationship with Gabby. The complaint I Have is that the audio and quality of the sound goes up and down. This breaks my enjoyment when the voice pitches weirdly. otherwise this is a great audible.

This is the 2nd book in the Witchy World series by Jamie McFarlane. Felix character grows a lot and more is revealed about him and his family. He is definitely a hero as he tries to help everyone he meets. I really enjoyed this Audio book. Lou Lambert is the perfect narrator for this series, just what I imagine Felix Slade sounds like. Highly recommend this series.

Not as good as the first but I still liked it. Would read the next for sure

Something is stirring in Felix Slade

Something is stirring in Felix Slade, listen as his journey continues and more of his past is revealed, meet new friends and enemies in this tale.