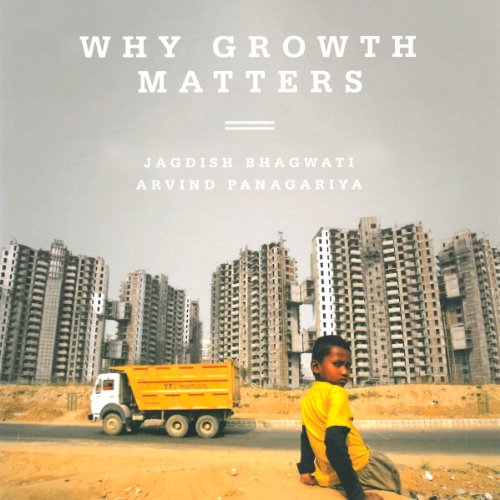 By: Jagdish Bhagwati,Arvind Panagariya
Narrated by: Manish Dongardive
Try for $0.00

In its history since Independence, India has seen widely different economic experiments: from Jawharlal Nehru's pragmatism to the rigid state socialism of Indira Gandhi to the brisk liberalization of the 1990s.

So which strategy best addresses India's, and by extension the world's, greatest moral challenge: lifting a great number of extremely poor people out of poverty?

Bhagwati and Panagariya argue forcefully that only one strategy will help the poor to any significant effect: economic growth, led by markets overseen and encouraged by liberal state policies. Their radical message has huge consequences for economists, development NGOs and anti-poverty campaigners worldwide. There are vital lessons here not only for Southeast Asia, but for Africa, Eastern Europe, and anyone who cares that the effort to eradicate poverty is more than just good intentions. If you want it to work, you need growth. With all that implies.

What listeners say about Why Growth Matters

What would have made Why Growth Matters better?

Could someone please tell Manish that this is a book is about the economic past and the future outlook of India. It is NOT a Harry Potter book. And what is with the Indo-American accent? I couldn't get past the 2nd chapter. Definitely not worth the $

Narration was flawless, except one instance where tilted was read as titled (;) damn the puritan in me). clarity of narration was good, and of course hours well spent on this eye opening book.

What would have made Why Growth Matters better?

A good analysis of the economic problems facing India, but unfortunately almost impossible to listen to due to the poor narration! The performer mispronounces words and reads in a tone more suitable to a bad adventure novel than to academic argument. An unfortunate choice by the publisher, given the prominence of the author.