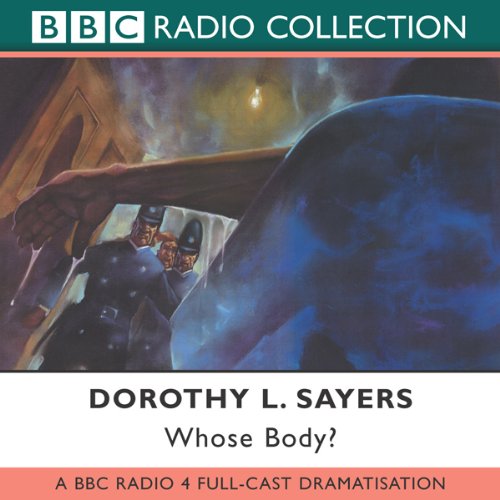 Wimsey’s mother, the Dowager Duchess of Denver, rings her son with news of ‘such a quaint thing’. She has heard through a friend that Mr Thipps, a respectable Battersea architect, found a dead man in his bath - wearing nothing but a gold prince-nez. Lord Wimsey makes his way straight over to Mr Thipps, and a good look at the body raises a number of interesting questions.

Why would such an apparantly well-groomed man have filthy black toenails, flea bites and the scent of carbolic soap lingering on his corpse? Then comes the disappearance of oil millionaire Sir Reuben Levy, last seen on the Battersea Park Road. With his beard shaved he would look very similar to the man found in the bath but is Sir Levy really dead?

I'm a big fan of Dorothy Sayers, and I love these dramatizations starring Ian Carmichael. This is another good one. The ending's a little odd and a bit forced, but whatever - the performances are great.

BBC radio drama at its best - Ian Carmichael and Peter Jones are first class, establishing the master servant relationship with its mixture of formality and intimacy. An honest adaptation of the original, finely characterised and suitably paced. Wisely, in other dramatisations, the BBC abandoned Wimsey's singing; it jars in this one.

Love the cast all the voices fit the characters and story flows well.
Good buy

this works well as a good first time out for lord Peter wimsey. well told with good performance from leading actors.

great story....but then i love the peter wimsey stories. another triumph for ian carmichael. 👍

Lord Peter does it again!

What can you really say about D.L.S that hasn't been said already. Fantastic weaving of characters and plot as Lord Peter solves a dastardly crime with the help of his butler, Bunter, and his good friend, inspector Parker. A stellar British cast lead by Ian Carmichael. For me this story could not be improved on.

one of the best radio shows ever!!! listening to that voice is the highlight of the day!!!

Ian Carmichael makes the perfect Lord Peter. He might've been too old even when this was recorded, but he got it note perfect all the same. Not my favourite of the radioplays, but a decent introduction before you get onto more emotionally involved stories like Strong Poison.