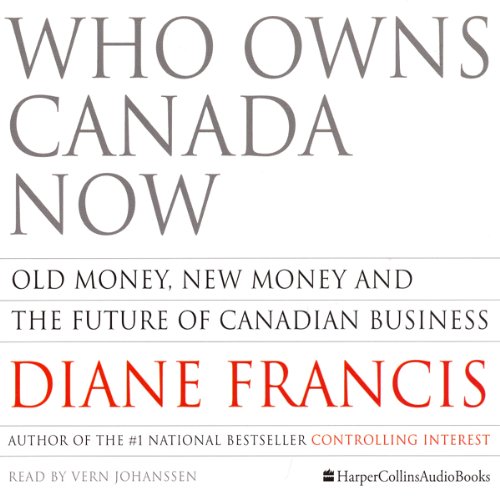 Over 20 years ago Diane Francis, in her revelatory best seller Controlling Interest, revealed the startling fact that one-third of Canada's wealth was controlled by just 32 families and five conglomerates. Has the concentration of power increased in the ensuing decades?

Media coverage would lead us to believe so, but Francis disagrees. Today, the balance has shifted: only half the families cited 20 years ago and only one of the five conglomerates remain major players. The old boys' network of risk-averse investors has been replaced by daring Canadian innovators, many of them self-made.

Who Owns Canada Now demonstrates that Canada is currently led by business moguls who offer innovative policies and a new vision for the country. Through incisive analysis and exclusive interviews, Francis reveals our country's most powerful players in the most important business topic of the year.

To my thinking, this is not the same thing as Who Owns Canada Now since the author herself spends a great deal of time writing about the good and bad of allowing non Canadians to own Canadian resources, and devotes most of the book to telling the reader that most of the Canadians she writes about own vast amounts of foriegn based businesses.

A book that could properly support the title Who Owns Canada Now would instead have told me things like how much of Canada's land and businesses are owned by the crown, by provincial governments, and by private citizens. I have finished the book and I have learned none of this.

Also, the reader reads to fast espcially in the first of the book like he is in a race. Also, the author is female writing in the first person but the reader is male and that bothers me that he is always saying 'I' when it does not fit my mental image of the author.

I struggled to finish this book, and didn't manage to. I found it extremely dry and the narrator hard to listen to. He lacked character in his reading and made it dull and tiresome. I would often find myself thinking of something else and realize I wasn't paying attention to the book. Every other book I have read or listened to I have finished work more knowledge than I started. I can honestly say I walked away from this one with nothing more than 1 fewer Audible credit. And unfortunately because it was an audio book, its not even useful as fire starter. Waste of a credit and I will be exchanging it.

In context of 10 years ago when written, it would still be dull and reflective more of the author's acknowledging her relationships with the 1% while trying to maintain she was not one of them.

Chock full of useful info on a rare a-book topic

I bought this tilte for its rare subject matter. It doesn't disappoint...it's saturated full of useful info on Canadian companies, personalities, and historical developments, all divided by industry sectors. The only small quibbles I had with the whole production was the two or three repetitions. I thought my mp3 player may have skipped but nope, the same ideas (almost verbatim) were repeated a few times. And I felt that Francis -- although she was objective and fair for the most part -- was here-and-there a bit too much of a booster of some of the companies she covered and didn't get into the juicy scandals (Bre-X, Nortel, Livent, et cetera).

PS: Please ignore the story and performance ratings...I'm against forcing people to fill those out.