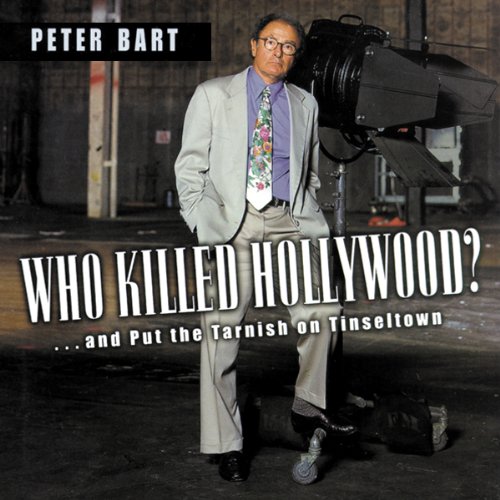 In this passionate love-hate letter to the film industry, Peter Bart pulls together his best columns from Variety and GQ, outlining in detail the history and inner workings of Hollywood. In story after story, Bart shows how the major studios have diverted their energies away from production of the shrewdly crafted pictures that once made the industry powerful. There isn't much range or innovation in the movies today, only a handful of salable subjects: natural disasters, aliens, dinosaurs, ghosts, monsters, or any combination thereof. All are subjects easily parlayed into theme-park environments, action figures, video games, and clothing lines. Even the once edgy independent producers like Miramax and New Line have been acquired by conglomerates. Who and what will resurrect Hollywood? Peter Bart has the answers.
©1999 Peter Bart (P)2000 Blackstone Audio, Inc.

"Tongue lashings the likes of which have never been heard before will make listeners laugh with glee.... Great fun and highly recommended." (Library Journal)
"Fans of show business will feast on the material. And they will have this feast delivered with aplomb by Edward Lewis." (AudioFile)

an explanation of why Hollywood has become boring

A really good history of Hollywood during the go-go years. Great fun if you were there and illuminating for anyone in the industry at the time or who misses really interesting movies.

A Hollywood wise man once said...

In this rare tome you'll find a jack of all movie trades relic whose insider prose defines the last half of the 20th century as the end all zenith in US entertainment and pop culture. For Bart is a walking encyclopedia of talented good old days Hollywood before ageist Ivy League bean counters took over. While his most sage persona is not served well here by a cold robotic narrator and the last two hours are a study in politics and sex scandal, he gets a pass since Peter is still the Herodotus of classic Hollywood, the romantic messenger of the way we were in this town for those of us who live in the past with no apologies and no regrets.