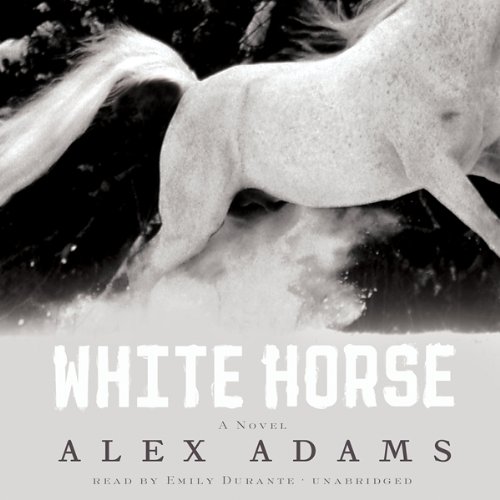 By: Alex Adams
Narrated by: Emily Durante
Try for $0.00

White Horse is the first book in an absolutely unique debut trilogy - a postapocalyptic thriller chronicling one woman’s quest to nurture those she holds dear against the backdrop of a shocking new world.

Thirty-year-old Zoe wants to go back to college. That’s why she cleans cages and floors at Pope Pharmaceuticals. If she can keep her head down, do her job, and avoid naming the mice, she’ll be fine. Her life is calm, maybe even boring - until the end of the world arrives and the president of the United States announces that humans are no longer a viable species.

Zoe starts running the moment she realizes everyone she loves is disappearing. Her boyfriend Nick, fearing he’s contracted the virus, leaves for Greece. When Zoe discovers she’s pregnant - and entirely alone - she treks across the world to find Nick and reunite her growing family. On the way she encounters characters both needy and nefarious - some human, some monster, and some uncertain beings altered by genetic mutation - and comes to see that humanity is defined not by genetic code but by soulful actions and choices.

Told in alternating before and after chapters, White Horse is a terrifying and romantic story that readers will be unable to put down.

“Adams’ fantasy is brilliant! It’s McCarthy’s The Road on hope steroids. Adams’ narrative is the prose of the world’s destruction, beautiful yet horrible. Her amazing characters are full of both hope and hopelessness in the face of death - and worse. This is what apocalyptic fiction will aspire to be from now on.” ( Urban Fantasy)
“Adams has an excellent sense of timing, delivering gasp-inducing moments that punctuate her nightmare with verve.” ( Kirkus Reviews)

What listeners say about White Horse

The character development in White Horse is so sparse that If it were not for this books almost complete lack of meaningful action I might have thought it was a comic book converted to audio. It's possible I'm not the only one who feels that way since someone (the publisher?) felt it necessary to add the preface "A Novel" to the title.

It contains the ingredients that the genre requires: If you're looking for zombies - they're here but they are boring. If you are looking for apocalypse - it's there but it's cause is mundane (Mad-man-made pandemic? Come on.) and it's outcome is only crudely sketched.

And it's also left out what the genre demands be left out else the author fall into a vast logic hole - so no explanation of the why the diseased exist just fine while the living can't fine enough to eat.

I'll also mention that there were some distinctly unpleasant scenes whose brutality added absolutely nothing to the plot. And, since it was impossible to care about any of the characters, these grotesque passages seemed to be less about moving the action forward and more about giving a sharp poke in the eye (so to speak) to the listener.

What disappointed you about White Horse?

Would you recommend White Horse to your friends? Why or why not?

Hated her performance. She's the reason I quit the book

I normally love postapocalyptic fiction, this may have been a better read than a listen, - at least for me

Would you be willing to try another one of Emily Durante’s performances?

I don't think I'd buy an audio book just because Ms. Durante was the narrator. She didn't bring much to the table, so far as I could tell.

Maybe I'm just getting old and cranky, but I do enjoy a well written book. I am 2 chapters into White Horse and once again I find I have bought a very poorly written book. My gut feeling is to walk away from it. So far it's been listening to the main character talking to herself in her head and then cutting to an incredibly unrealistic action scene where she grabs some rapist in mid-thrust by the scrotum to stop him.

Uh, yeah. Right. I'd like to know the self-defense class the author took to learn that particular move.

I will attempt to read on, but I am holding out very little hope.

I made it about 2 more chapters into the book, but found the whole thing so ridiculous that I just stopped. Life is too short for dumb books. How did it get such good reviews out of Kirkus & Huffington Post, I haven't a clue.