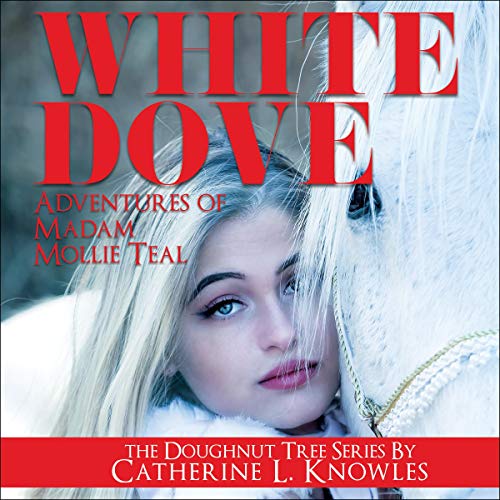 By: Catherine L. Knowles
Narrated by: Lily Sage
Try for $0.00

In an adventurous, whimsical romance novel comes the prequel to The Doughnut Tree. Catherine L. Knowles has written White Dove, an epic story of love, betrayal, hate, and survival set against the tumultuous background of the Civil War and General Sherman’s Scorch the Earth campaign.

At the center of the tale is a former bordello business manager Mollie “Sissy” Greenleaf, a “spitfire” loud, outspoken woman. Sissy finds herself in the middle of a heated courtroom battle to defend the honor of her deceased best friend and confidant Mollie Teal and her estate.

Forced into the life of prostitution at a very young age, Mollie Teal grows up in the midst of the Civil War and quickly learns that the Union soldiers aren’t always the good guys. Enter Union Brigadier General John Basil Turchin, a battle-hardened former Russian who becomes infatuated with the beautiful young Mollie Teal, aka White Dove, and fights to capture her love at all costs.

Mollie's friends - Herman Deeley, a young former black slave and her guardian angel and confidant sworn to protect Mollie and C.C. Taylor, a wounded Confederate soldier who gets his dying wish to return to his burned plantation - both, find an unexpected life adventure with the to-be-notorious Madam Mollie Teal.

Against all odds, this group of companions find many twists and turns in this romantic tale of love affairs fraught with danger and compromised by the epic and grim events of the Civil War and its destructive realities that can turn love into hate and romance into revenge.

White Dove is a heart-warming historical fiction novel that’s sure to entertain and touch your heart.