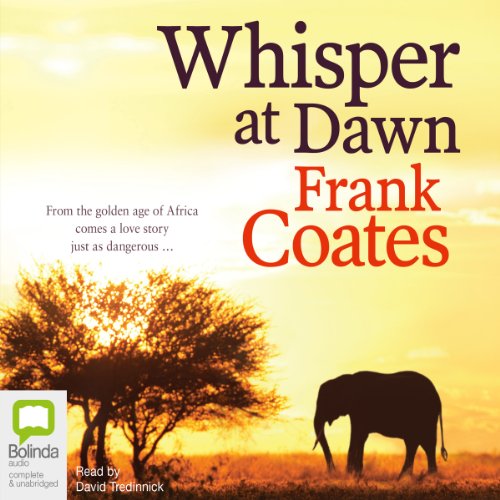 By: Frank Coates
Narrated by: David Tredinnick
Try for $0.00

At the dawn of the 20th century, young Dan Sullivan signs on to fight the Boers, but discovers war has horrors beyond the battle fields. In East Africa, a railway crosses a land with an unimaginable throng of wild animals. It is the golden age of the white hunter - men whose exciting lives entice rich hunters to go in search of big, dangerous game.

After many failed attempts, old Bill Freeman sees his chance to make his fortune as a hunter and convinces Dan to join his fledgling safari company. Bill's young granddaughter, Liz, falls in love with Dan and with Africa - but tragedy forces her to return to Australia. Years later, as the shadow of the Great War falls across the continent, Liz returns to Africa and the man she has dreamed of since childhood. But Dan has secrets that threaten to shatter their love, and he must finally decide what courage truly means.

What listeners say about Whisper at Dawn

yes it is well read and a good storyline

the australian larrikin style and easy going flow of the story

he seems to bring the people to life

If you could take any character from Whisper at Dawn out to dinner, who would it be and why?

elizabeth she sounds a very nice person to be with

People likened this book to a Tony Park,
Maybe if you read something written by Tony in fifth grade, this could have been a great story but it ended up as a letdown