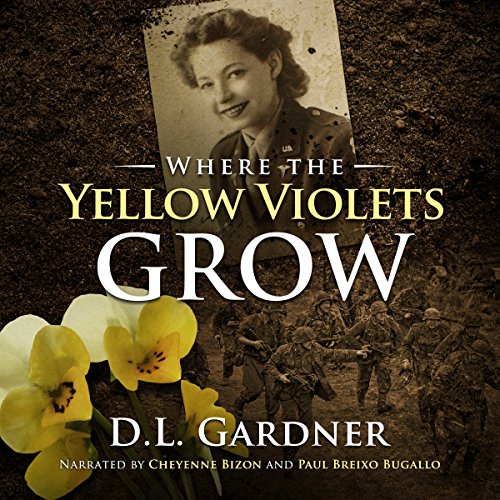 Where the Yellow Violets Grow

By: D.L. Gardner
Narrated by: Cheyenne Bizon,Paul Bugallo
Try for $0.00

Petworth, England 1944. First Lieutenant Janet Castner is assigned to a small hospital unit when Operation Overload begins. Amid the turbulence of nursing the critically wounded GIs arriving from Normandy, her arrogant commanding officer takes her aside and asserts his love for her. Passions flare when he wrongly suspects her and another officer of having an affair.

Unbeknownst to the major, Janet has instead sworn her love to a seriously injured infantry man Sergeant Lou Morrissey. When the major discovers their clandestine romance, he wields his authority in order to destroy their lives forever.

Based on actual letters written by Lieutenant Janet Castner during WWII.

What listeners say about Where the Yellow Violets Grow

Well worth the buy, I didn't want it to end.
Highly recommended
Plan to read other books from this author

A romance based on actual letters...

This is a beautifully crafted historic romance based on actual letters written by First Lieutenant Janet Castner, an American nurse, stationed in England during WWII ... Dianne Lynn Gardner's sister-in-law had this stack of love letters written by her mother, and asked Diane to write this story. This book really is a letter of love, as well as a slice of real family history...
I had read and enjoyed D L Gardner's YA historic fantasy, Thread of a Spider, and I knew that D.L. Gardner had great writing chops, plus, I was intrigued by the backstory, so I had to read this one!
This story takes place in a small military field hospital in Petworth, England with WWII as a backdrop... It is the story of an ill advised romance between Castner and Sergeant Lou Morrissey... a romance that could end the First Lieutenant's career...

I rather enjoyed the narration team. Having a male and female was a good idea... Paul Bugallo was great, and my only niggly little complaint was that I felt Cheyenne Bizon rushed the dialogue a trifle.

Where the Heart Grows

Would you listen to Where the Yellow Violets Grow again? Why?

Oh yes def! It is so much better than reading it. The people that read this out loud made it jump from the pages made it more real.

What was one of the most memorable moments of Where the Yellow Violets Grow?

Where a patient ended were he should not have been put.

The heroine talks about home and memories of it.

At the end from the author about the book