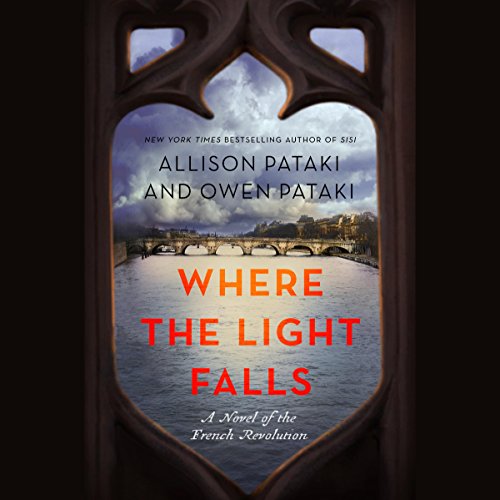 Where the Light Falls

By: Allison Pataki,Owen Pataki
Narrated by: Bruce Mann
Try for $0.00

A rich and sweeping novel of courage, duty, sacrifice, and love set during the French Revolution from New York Times best-selling author Allison Pataki and her brother, Owen Pataki

Three years after the storming of the Bastille, the streets of Paris are roiling with the spirit of revolution. The citizens of France are enlivened by the ideals of liberty, equality, and fraternity. The monarchy of King Louis XVI and Marie Antoinette has been dismantled - with the help of the guillotine - and a new nation is rising in its place. Jean-Luc, an idealistic young lawyer, moves his wife, Marie, and their infant son from their comfortable life in Marseille to Paris in the hopes of joining the cause. André, the son of a denounced duke, has evaded execution by joining the new French army. And Sophie, a beautiful aristocratic widow, embarks on her own fight for independence against her powerful, vindictive uncle.

As chaos threatens to undo the progress of the Revolution and the demand for justice breeds instability and paranoia, the lives of these compatriots become inextricably linked. Jean-Luc, André, and Sophie find themselves in a world where survival seems increasingly less likely - for themselves and, indeed, for the nation.

Featuring cameos from legendary figures such as Maximilien Robespierre, King Louis XVI, and Alexandre Dumas, Where the Light Falls is an epic and engrossing novel, moving from the streets and courtrooms of Paris to Napoleon's epic march across the burning sands of Egypt. With vivid detail and imagery, the Patakis capture the hearts and minds of the citizens of France fighting for truth above all and for their beliefs in a cause greater than themselves.

What listeners say about Where the Light Falls

I wasn't wild about this book, but I enjoyed it. I was put off at first by the narrator's voice, but he grew on me, and actually he was quite good with women's voices, which isn't always the case. It had a lot of interesting history in it, and it led me to look into a few historical things that I wanted to know more about. I guess my criticism is that it edged toward melodrama; there's nothing subtle about the plot events. Also, I feel a scene at the end was missing -- especially given the melodramatic edge. But, I listened to the end, and I did enjoy it.

The subject was very interesting to me and didn’t mind at all the poetic license taken by the writers to make it thrilling and dramatic. The reader was superb. His French pronunciation was very good as was his storytelling abilities. I was totally engaged from the beginning.

Great Story with a History Lesson!!

What disappointed you about Where the Light Falls?

There were no parts of the book that disappointed me. I couldn't stop listening!

What was one of the most memorable moments of Where the Light Falls?

The executions and the atrocities that occurred back then.

Have you listened to any of Bruce Mann’s other performances before? How does this one compare?

If you could play editor, what scene or scenes would you have cut from Where the Light Falls?