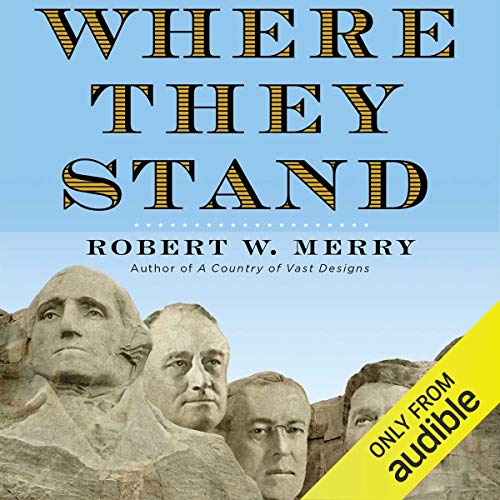 The author of the acclaimed biography of President James Polk, A Country of Vast Designs, offers a fresh, playful, and challenging way of playing “Rating the Presidents,” by pitching historians’ views and subsequent experts’ polls against the judgment and votes of the presidents’ own contemporaries.

Merry posits that presidents rise and fall based on performance, as judged by the electorate. Thus, he explores the presidency by comparing the judgments of historians with how the voters saw things. Was the president reelected? If so, did his party hold office in the next election?

Where They Stand examines the chief executives Merry calls “Men of Destiny,’’ those who set the country toward new directions. There are six of them, including the three nearly always at the top of all academic polls—Lincoln, Washington, and FDR. He describes the “Split-Decision Presidents’’ (including Wilson and Nixon)—successful in their first terms and reelected; less successful in their second terms and succeeded by the opposition party. He describes the “Near Greats’’ (Jefferson, Jackson, Polk, TR, Truman), the “War Presidents’’ (Madison, McKinley, Lyndon Johnson), the flat-out failures (Buchanan, Pierce), and those whose standing has fluctuated (Grant, Cleveland, Eisenhower).

This voyage through our history provides a probing and provocative analysis of how presidential politics works and how the country sets its course. Where They Stand invites readers to pitch their opinions against the voters of old, the historians, the pollsters—and against the author himself. In this year of raucous presidential politics, Where They Stand will provide a context for the unfolding campaign drama.