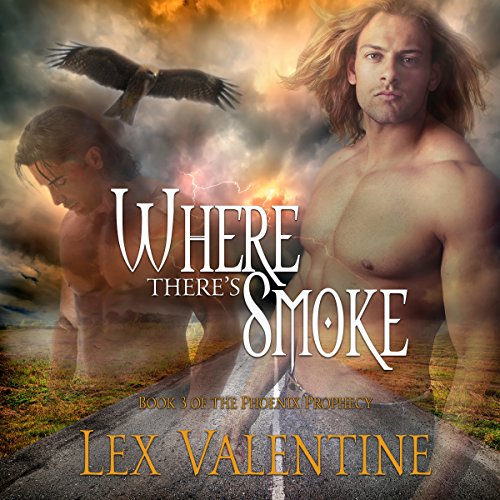 By: Lex Valentine
Narrated by: Chris Chambers
Try for $0.00

A murderous father. A son with a price on his head. Zander's year-long affair with a mysterious woman ends when she tells him that her abusive mate is the father he's never known. The woman, a prophecy-dreaming immortal known as the Phoenix, explains that Zander has three brothers and that his father killed their mothers. Now, the Phoenix has dreamt of her mate's death and Zander's destiny. Voth is the Phoenix's successor and Zander's true mate. The two set out to find Zander's brothers while eluding the assassins sent after them by Zander's father. Passion burns hot between them, sealing their fate, as their journey leads them to fulfill the Phoenix's prophecy.

What listeners say about Where There's Smoke

This book keeps you on your toes. It's fast paced, but not so much that it doesn't make sense. The story has all sorts of fantastical characters and it wall works together. Right, wrong, vengeance, and justice all play a role in the setting up anew from the depths of evil. Zander and Voth are awesome. I want a Voth ;-) A great story.

The narrator Chris Chambers does a great job. The story is interesting.
The sex and romance is hot. Two guys working together and learning to love each other.
Good paranormal activity.
Overall a good listen.