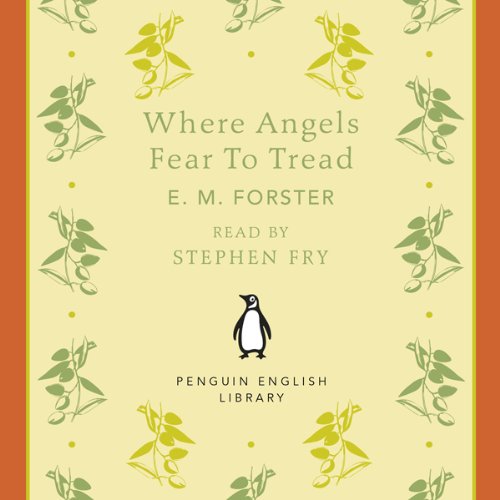 Where Angels Fear to Tread

Penguin Audio presents E.M. Forster's Where Angels Fear to Tread, adapted for listening and now available as a digital audiobook as part of the Penguin English Library series. This abridged version is read by Stephen Fry.

"I had got an idea that everyone here spent their lives in making little sacrifices for objects they didn't care for, to please people they didn't love; that they never learned to be sincere - and, what's as bad, never learned how to enjoy themselves."

E. M. Forster's first novel is a witty comedy of manners that is tinged with tragedy. It tells the story of Lilia Herriton, who proves to be an embarrassment to her late husband's family as, in the small Tuscan town of Monteriano, she begins a relationship with a much younger Italian man - classless, uncouth, and highly unsuitable. A subtle attack on decorous Edwardian values and a humanely sympathetic portrayal of the clash of two cultures, Where Angels Fear to Tread is also a profound exploration of character and virtue.

Part of a collection of vintage recordings taken from the Penguin Archives, the Penguin English Library offers affordable, collectable, quality productions that are perfect for on-the-go listening.

What listeners say about Where Angels Fear to Tread

In this comedy of manners Forster exposes all that is absurd, small-minded and loveable by Bourgeois would-be cultural missionaries who take it upon themselves to "better" others. Forster's gift as a novelist is a keen insight into the dusty machinery of the human soul. He perceives the pedestrian and everyday factors that push people forward in their actions and he deftly applies this insight into his construction of characters.

Stephen Fry is always delightful in anything he puts his hand to. I would listen to him read the dictionary. I have long admired his convivial wit, timing, and his ability to understand and perform ridiculous characters with unflinching honesty, yet with gentle warmth. Fry's genuine love and understanding of human absurdity makes him the perfect choice for this selection by Forster.

I was worried that the abridged version might be lacking - but I found I enjoyed it very much. All of the best dialogue and essentials were painstakingly compiled for the abridged version. And while I certainly love a long audio book, it is occasionally nice to finish one in day and not be married to the damn thing for weeks on end. At 2 hrs 51 minutes, this little gem is refreshing in its brevity and was so entertaining I wouldn't hesitate to listen to it again at a latter date, especially if were I traveling and didn't want to commit to a longer selection.

I love to read older books, this one was not a disappointment. Stephen Fry did a great job with this book. would listen to another, in particular if Fry was reading.

Can I hire a hitman on Craigslist?

I had never read EM Forster before, and I was expecting..... something else. It is described as a comedy of manners, satirical, etc. but I found every character so horrible, shallow and/or ridiculous that listening became painful. If these had been real people, I would have gone to Craigslist to find a hitman to take them all out. (Okay, maybe except possibly Caroline, Phillip and Gino -- and I still would have smacked those three about the head and shoulders with some violence.) By the final tragedy I was just fed up with all of it, and actually angry.

I am wondering if all his books are like this, or if I dare try another. Sigh.

Fascinating novel - if you're an E M Forster - fan, and an excellent reader. Disappointed to discover that the text has been abridged slightly, which detracts from the pleasure of reading along with the narrator. This should be made clear for would-be purchasers - hence the 4 stars

stephen fry as always great. that's about it

bought it only because stephen fry was reading it. as always he is fabulous but the book itself is poor. storyline is annoying made me feel angry. disappointing. would not recommend