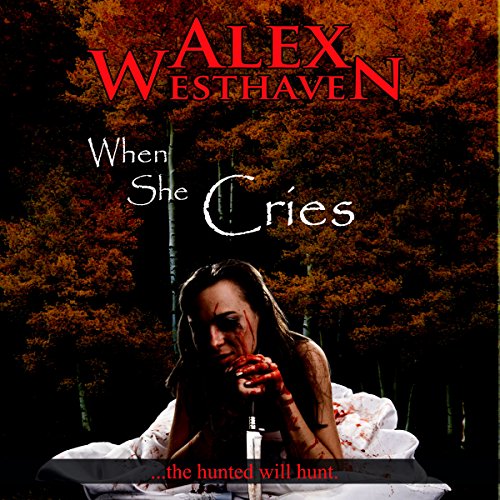 By: Alex Westhaven
Narrated by: Kevin Clay
Try for $0.00

When She Cries...the hunted will hunt.

Nicole Strickly is excited to get out of the city and spend a weekend in the mountains, even if her date is a little sketchy. They aren't far down the road before she realizes her mistake, but there's no turning back, and what awaits her when they arrive at camp is far worse than she could ever have imagined.

Forced to run or die, Nicole finds herself embroiled in a gruesome game where the only reward for winning is three more rounds with the huntmaster himself,and an experience that will change the fiber of her very being... or as long as she can survive.

What listeners say about When She Cries

I really thought the author Alex Westhaven did a great job with this story. At first it took me back to a movie where men find sport in killing and hunting other people. I can't remember the name of the movie right off but as I listened to this story It was much better than the movie. I thought the authors take on the story was quite good.

Kevin Clay did a wonderful job with his narration of this story. As I listened to him I could tell that he got comfortable with his role. I enjoyed his performance from start to finish and look forward to listening to more audios he narrated. Overall, I give it 4 🌟 but in reality it's really 4 and a half 🌟. I must listen to story.

Sometimes the prey becomes the hunter!

**I was provided with a copy of this audiobook in exchange for a fair and honest review.

Eagerly anticipating a fun weekend of camping and hiking Nicole is horrified to discover that her date has lured her into being a participant in a terrifying game in which the female guests must compete for their lives as they are hunted down by Patrick, a master hunter. Patrick has more than a few secrets and Nicole discovers this hunt is part of a web based realty show that is earning big money for him. The more pain and terror inflicted on the prey the higher the viewers. Despite her fear Nicole feels somewhat of a spark between her and Patrick and igniting it buys her some time and a chance to turn the tables on him.

I liked the idea of this story. The premise is not a new one but the telling held enough twists and nuances to keep it fresh. I did not find it very believable that Nicole’s date would select someone he was acquainted with through work to participate in this perverse game and I questioned why she would agree to go with him. He was not very likeable and I was not dismayed at how things turned out for him. The narrator’s voice was pleasant and listening was enjoyable. I think the main characters could have been developed a bit more. Aside from their part in this story I did not get any kind of sense of what drove their personalities. The money certainly drove Patrick to continue this cruel game but no underlying reason seemed to exist. A major disappointment for me was the lack of emotion I felt from the characters. Fear, terror and even lust are strong emotions and were downplayed more than I would have expected. I should have been able to almost taste Nicole’s fear but it simply did not hit the mark. The action was fast paced and I really enjoyed the use of technology.

This audiobook is one of the thrillers that kept my interest . I listened intently and wanted to know how the story will end

The Hunted becomes the Hunter!

What did you love best about When She Cries?

It was well paced. I felt that the book moved along at a good enough clip giving you enough detail to keep stringing you along while developing layer up on layer of mystery.

At first I was kind of taken aback because I felt like his voice was more suited to some corporate training video rather than fiction. As the story progressed though, he seemed to get deeper into the characters and situations and I looked forward to his reading each time I pressed play. It was very easy to listen to him for large chunks at a time!

If you could take any character from When She Cries out to dinner, who would it be and why?

Nicole Strickley, she's a resilient bad-ass woman who would probably kill me if I turned her down for a date.

Interesting premise, great story with quite a twist at the end, and great narration made the time fly by with this one!

(I received a free audible copy for an honest review.)I don’t know where or when the idea of hunting people first slid into a human, but it is a subject that inspires a certain kind of panic. Stuck in the wilds, the higher brain functions of a human can help befuddle any predatory animal and allow for escape. But when the predator is just as high functioning as the human prey, the idea of escape becomes an illusory goal.

I like the narration of When She Cries. It was easy to lose track of time listening to the story. However, I don’t think that Mr. Clay fully utilized the emotions inherent in the writing. While his voice is pleasant and easy to listen to, it might have been better with a bit speed differential within the different scenes.

Of course, some of the dialogue between the characters did feel somewhat stilted and may have influence Mr. Clay while he read. I rolled my eyes a few times during Nicole’s inner monologues. Not as often as I expected, but a few times where it just seemed a bit forced into the plot rather than fluidly deriving from the character herself.

Because of these thoughts while I read, I did not feel the fear and panic intended by Mrs. Westhaven. But the story and narration is good enough that I really wanted to know how it ended.

And the end is worth gliding along Mr. Clay’s voice and slipping into Mrs. Westhaven’s mind. The end is very satisfying.

This story does kick in quickly but the characters are so dumb that they just don't feel real. umm I'll never date this guy again but I will go on a camping trip with him and a bunch of strangers just for....well no hood reason. this just a horribly written book.