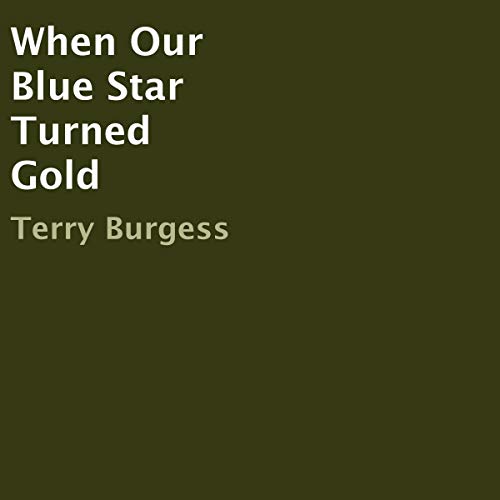 When Our Blue Star Turned Gold

By: Terry Burgess
Narrated by: Terry A. Burgess
Try for $0.00

This is a story of pain, loss, and hope. Our son was killed on foreign soil, and in an instant our world was forever changed. Just as yours would be.

Chronicling the life of only one of the currently 7,000 Gold Star families from the wars in Iraq and Afghanistan, When Our Blue Star Turned Gold takes the listener from the early morning hours of his final and fatal battle to the ongoing journey of staff Sgt. Bryan Burgess’ family.

Joining organizations and ultimately creating their own, the Burgess family deals with the tragedy of having their son killed only three weeks before he was due to be home.

Grief wrestles with honor as the Burgess family tries to make sense of a haunting premonition of Bryan’s death and the struggle to memorialize his sacrifice in a nation that is not entirely grateful.

This book tells how our world changed and how we adapted to a life of grief and turned it into a way to honor a life lost.

We learned of the lack of support for Gold Star parents, and we created our own organization. Through trial and error, we have a network of friends who have become family. We have learned the hard way of what can be said and what should not be said to any person grieving an unexpected loss.

What listeners say about When Our Blue Star Turned Gold

This book really helped me understand a little better what Gold Star families go through.