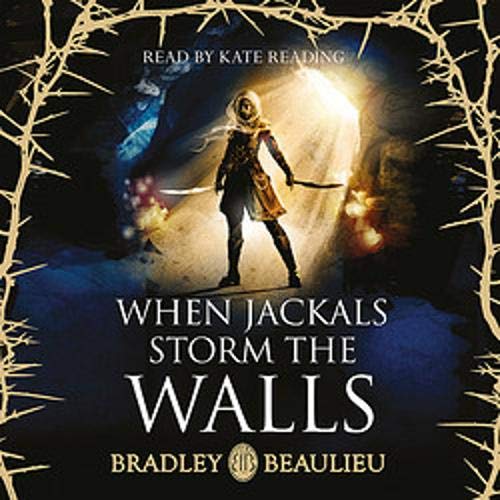 When Jackals Storm the Walls

By: Bradley Beaulieu
Narrated by: Kate Reading
Try for $0.00

The reign of the Sharakhani kings has been broken. Queen Meryam now rules the city.

Çeda, meanwhile, has succeeded in lifting the asirim's curse, though it came at a terrible cost. Nalamae was slain in battle against her sister goddess. All is not lost, however. Çeda knows Nalamae will be reborn and so begins a quest to find her.

The scheming King Ihsan has been busy as well, mining the legendary Blue Journals for a way to save the city and the desert beyond from certain destruction. He believes he's found one, but it won't be easy, especially when the only tools left at his disposal are his own wits and guile. As he begins to gather the other fallen kings and convince them to work together, he realises that one person is crucial to their success: Çeda.

Çeda must choose: work with the kings she's vowed to destroy or risk losing the city she loves. Whatever she decides, the path will be dangerous. Her allies are divided. Sharakhai is under threat from neighbouring kingdoms. And now the gods themselves are stepping in....

What listeners say about When Jackals Storm the Walls

The recording has just skipped for 10th or 11th time. I don't know how much of the story I have missed. I will ask for a refund

Don't like this narrator, prefer the original narrator: Sarah Coomes Otherwise, it was a great story, love how in-depth it is and the constant character progression.