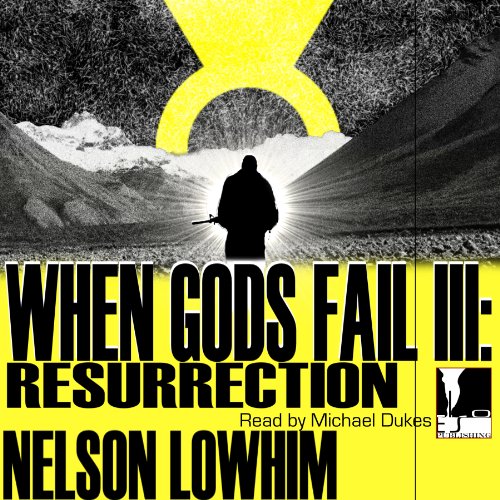 By: Nelson Lowhim
Narrated by: Michael Dukes
Try for $0.00

The only friend he ever had is murdered. And the emptiness of the land has not been filled by the new commune. Tom struggles to move away from his past and find peace. But he does find that he's good at killing. And he does just that, and comes home a hero. But this isn't normal life. These post-nuclear wasteland times are treacherous, and being a hero is just the thing to get you killed.

Tom soon finds that he needs to choose his friends wisely, and that cruelty in these times is forever prevalent. Can he be the force for good? Will he even survive to make such a choice? Find out in this exciting installation of the third book in the When Gods Fail series!

What listeners say about When Gods Fail III: Resurrection

Where does When Gods Fail III: Resurrection rank among all the audiobooks you’ve listened to so far?

I think When Gods Fail III is not as dismal as the first, since the characters have been long acquainted to their post-apocalyptic world. A lot of the raw emotions from the first and second books are more flat, not to say that the same gritty style isn't here. We don't see much of the Tom's turmoil, but are given a new, evolved "survivalist" Tom, who has seen some dark things happen in the new world.

What was one of the most memorable moments of When Gods Fail III: Resurrection?

The climax of the story was amazing. I love that this slow burn pulled from the second part of the series comes to an explosive end.

Dukes's performance of Lowhim's novel is my favorite of the three authors. I think it is safe to assume Dukes did his research getting into Tom's head. Overall, it was a solid performance.

Yes and no. The story was there, I was hooked into the world Lowhim created, but this isn't one of those books you can stand to get too deeply immersed into for a single setting without feeling that book-lag from a dry, depraved read.

I'm sad to see the series is over. I enjoyed Lowhim's ability to write in a way that really resonates a deep void in humanity.