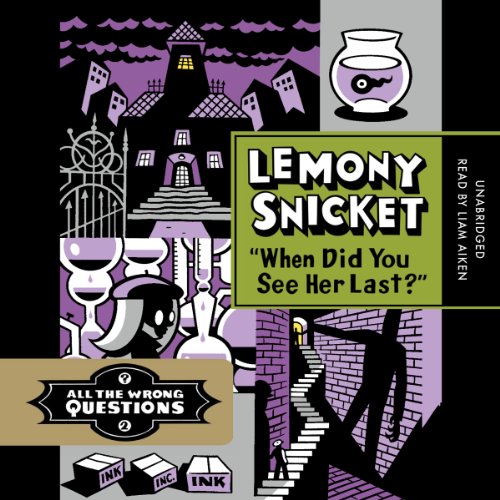 'When Did You See Her Last?'

By: Lemony Snicket
Narrated by: Liam Aiken
Try for $0.00

Before the Baudelaires became orphans, before he encountered A Series of Unfortunate Events, even before the invention of Netflix, Lemony Snicket was a boy discovering the mysteries of the world. I should have asked the question "How could someone who was missing be in two places at once"? Instead, I asked the wrong question - four wrong questions, more or less. This is the account of the second. In the fading town of Stain'd-by-the-Sea, young apprentice Lemony Snicket has a new case to solve when he and his chaperone are hired to find a missing girl. Is the girl a runaway? Or was she kidnapped? Was she seen last at the grocery store? Or could she have stopped at the diner? Is it really any of your business? These are all the wrong questions.

What listeners say about 'When Did You See Her Last?'

amazing as it is usual for lemony snicket's books. very interesting storyline and very peculiar way of writing it. love it!

We LOVE this series!!!

Every time we listen to a book as a family we all can't wait for the next one to start!

I have been pleasantly surprised by this series. The author has a quirky writing style, but I find I enjoy it.
I also like how he just doesn't "hand it" to you. You have to concentrate on small details. For example, a hat in book 1 may be significant in book 2. At the time you note the hat, but did you note the significance of the hat. I love these scattered "Easter eggs" throughout the book.
I also adore the characters. They are becoming well liked friends. I feel the town itself is a "main" character in this book and that "she" has many more secrets to tell.
Let us move on to the next.

When did you see her last

This is a great book l would say if you like mysteries or the Baudelaire books you would like it.

easy to digest, a mystery, funny, excellent writing, the voice actor was ok, some things he's not as good at portraying what I feel the author meant to invoke with his words

A wonderful prequel to "Unfortunate Events"

A delicious kids' mystery in a quasi-noir style (with adult winks along the way, such as librarian "Dashiell Qwerty").

it's a cute little story but very short and I doubt anyone who didn't read his series of unfortunate events would enjoy it quite as much.