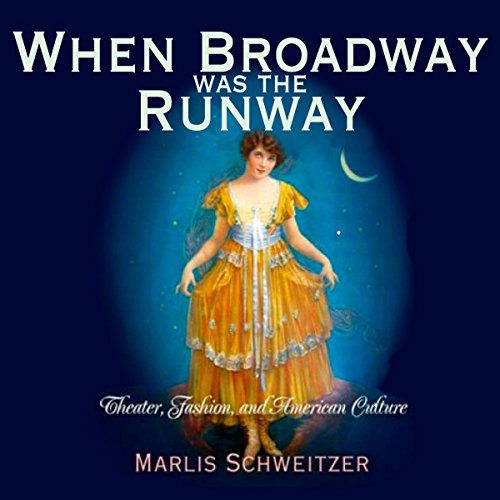 When Broadway Was the Runway

By: Marlis Schweitzer
Narrated by: Laura Faye Smith
Try for $0.00

Selected by Choice magazine as an Outstanding Academic Title for 2009

When Broadway Was the Runway explores the central and largely unacknowledged role of commercial Broadway theater in the birth of modern American fashion and consumer culture. Long before Hollywood's red carpet spectacles, Broadway theater introduced American women to the latest styles. At the beginning of the 20th century, theater impresarios captured the imagination of their largely female patrons by transforming the stage into a glorious site of consumer spectacle.

Theater historian Marlis Schweitzer examines how these impresarios presented the dresses actresses wore onstage, as well as the jewelry and hairstyles they chose, as commodities that were available for purchase in nearby department stores and salons. The Merry Widow Hat, designed for the hit operetta of the same name, sparked an international craze, and the dancer Irene Castle became a fashion celebrity when she anticipated the flapper look of the 1920s by nearly a decade.

Not only were the latest styles onstage, but advertisements appeared throughout theaters, in programs, and on the curtains, while magazines such as Vogue vied for the rights to publish theatrical costume sketches and Harper's Bazar enticed readers with photo spreads of actresses in couture. This combination of spectatorship and consumption was a crucial step in the formation of a mass market for consumer goods and the rise of the cult of celebrity. Through historical analysis and dozens of early photographs and illustrations, Schweitzer aims a spotlight at the cultural and economic convergence of the theater and fashion industries in the United States.

"A rich and highly readable historical analysis of the relationship among Broadway theater, fashion, gender, and consumerism. It is a story that was waiting to be told, and Schweitzer tells it in a meticulous and insightful way." ( American Historical Review)

What listeners say about When Broadway Was the Runway