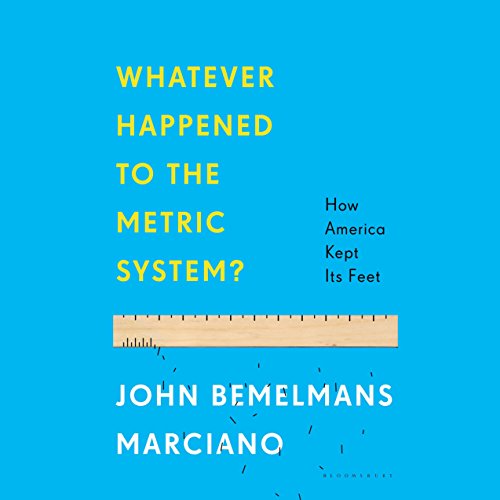 Whatever Happened to the Metric System?

By: John Bemelmans Marciano
Narrated by: Neil Hellegers
Try for $0.00

The American standard system of measurement is a unique and odd thing to behold, with its esoteric, inconsistent standards: 12 inches in a foot, three feet in a yard, 16 ounces in a pound, 100 pennies to the dollar. For something as elemental as counting and estimating the world around us, it seems like a confusing tool to use. So how did we end up with it? Most of the rest of the world is on the metric system, and for a time in the 1970s America appeared ready to make the switch. Yet it never happened, and the reasons for that get to the root of who we think we are, just as the measurements are woven into the ways we think.

John Marciano chronicles the origins of measurement systems, the kaleidoscopic array of standards throughout Europe and the 13 American colonies, the combination of intellect and circumstance that resulted in the metric system's creation in France in the wake of the French Revolution, and America's stubborn adherence to the hybrid United States Customary System ever since. As much as it is a tale of quarters and tenths, it is a human drama, replete with great inventors, visionary presidents, obsessive activists, and science-loving technocrats. Anyone who listens to this inquisitive, engaging story will never read Robert Frost's line "miles to go before I sleep" or eat a foot-long sub again without wondering, "Whatever happened to the metric system?"

What listeners say about Whatever Happened to the Metric System?

Very informative on learning why we measure the way we do. I had no idea that the push for metric in the US went back into the 1800's.

What made the experience of listening to Whatever Happened to the Metric System? the most enjoyable?

This is a far-reaching, exhaustively researched book that not only covers every aspect of the modern world's struggle to unify measures, but also deftly paints the historical backgrounds against which each episode is set and to which each is tied. The narrator expertly captures the author's subtle shuttling from academics to wry humor and back again. I cannot recommend this book too highly.

I really enjoyed this book. I enjoy how the story of measures decimals science was interwoven with history. from the title of the book and the information provided within the story I did not expect the conclusion the author presents. for a potentially extremely dull subject I found myself listening to chapter after chapter. I would recommend this book to any fan of science.

As a long-term advocate for the US embracing the metric system and a student of history, this provided some much appreciated context for why things are as they are. Still haven't changed my views but the wider context the author provided made it an invaluable investment of time.

A very well researched and presented narrative about the metric system. Full of great historical facts.

The facts and figures regarding the metric system are chronologically laid out in perfect detail. The book also doubles as a Old and New World history lesson relative to 18th and 19 Century. Well done.

I thought this book, based on the title, would be about measurement, the history of it, and why the United States never did switch to the metric system. The book was more about the measure of money, with some parts of the book about measurement and the standardization of measurement. I lost interest in the book about halfway through and ended up not finishing it.