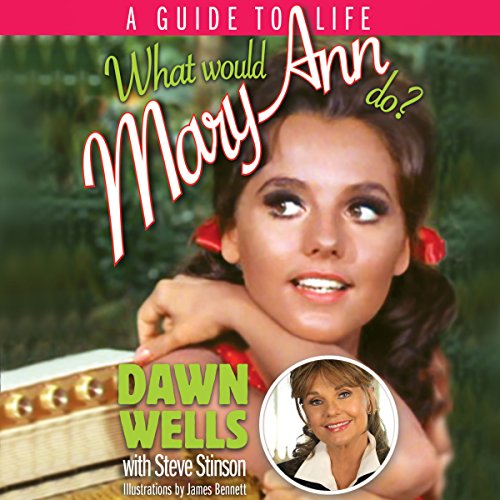 What Would Mary Ann Do?

What Would Mary Ann Do?

So, what would Mary Ann do?

As the sweet, polite, and thoughtful Mary Ann Summers from Kansas in the hit series Gilligan's Island, Dawn Wells created an unforgettable and beloved character that still connects with people 50 years from the show's debut in 1964. As the "good girl" among the group of castaways on a tiny island, she was often positioned against the glamorous and exotic Ginger Grant, played by Tina Louise, prompting many to ask: Are you a Ginger or a Mary Ann?

This book, charmingly narrated by Dawn Wells herself, not only helps listeners answer that question for themselves but also sends the inspirational and heartwarming message that yes, good girls do finish first. Part self-help, part memoir, and part humor - with a little classic TV nostalgia for good measure - What Would Mary Ann Do? contains 12 chapters on everything from how Mary Ann would respond to changes in today's culture to addressing issues confronting single women and mothers. Wells brings along her fellow characters from Gilligan's Island to illustrate certain principles, such as incorporating the miserly Thurston Howell III (Jim Backus) in a discussion on money. Anecdotal sidebars also describe fascinating facts and compelling memories from the show as well as some trivia questions to challenge fans and followers. This book provides inspiring lessons from TV's favorite good girl.

A must read for women of every age

Dawn Wells provides a refreshing handbook of morals long forgotten in today’s society. She does so with humor and care in every word. She also provides hope for the young ‘Mary Anns’ forced to live in a ‘Ginger’ era. I enjoyed every minute of the book, learning a lot along the way.


The book is preachy — sometimes very, very preachy and sometimes less so; however, Dawn Wells has an extraordinarily good narrator's voice.

I'm shocked that she doesn't have a narration career doing audiobooks. She has such a beautiful and clear and animated voice for narration.