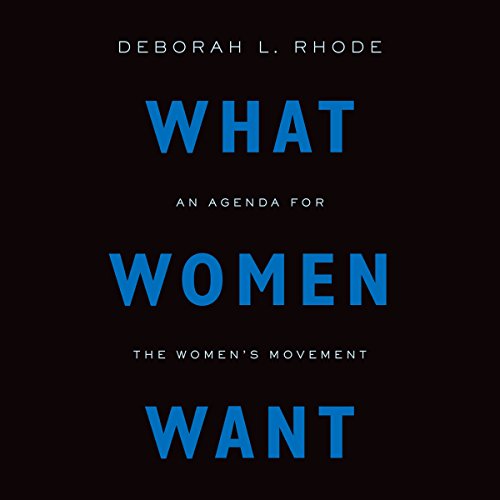 An Agenda for the Women's Movement
By: Deborah L. Rhode
Narrated by: Gayle Hendrix
Length: 9 hrs and 31 mins
Categories: Nonfiction, Social Sciences
3 out of 5 stars 3.0 (2 ratings)

American women fare worse than men on virtually every major dimension of social status, financial well-being, and physical safety. Sexual violence remains common, and reproductive rights are by no means secure. Women assume disproportionate burdens in the home and pay a heavy price in the workplace. Yet these issues are not political priorities. Nor is there a consensus that there still is a serious problem.

In What Women Want, Deborah L. Rhode, one of the nation's leading scholars on women and law, brings to the discussion a broad array of interdisciplinary research as well as interviews with heads of leading women's organizations. Is the women's movement stalled? What are the major obstacles it confronts? What are its key priorities and what strategies might advance them? In addressing those questions, the audiobook explores virtually all of the major policy issues confronting women. Topics include employment and appearance discrimination, the gender gap in pay and leadership opportunities, work/family policies, childcare, divorce, same-sex marriage, sexual harassment, domestic violence, rape, trafficking, abortion, poverty, and political representation, all with a particular focus on the capacities and limits of law as a strategy for social change.

Why, despite four decades of equal employment legislation, is women's workplace status so far from equal? Why, despite a quarter century's effort at reforming rape law, is America's rate of reported rape the second highest in the developed world? Part of the problem lies in the absence of political mobilization around such issues and the underrepresentation of women in public office. In an age where many women are reluctant to identify as feminists, a broad-ranging, expert look at where American women are today is more necessary than ever. This path-breaking book explores how women can and should act on what they want.

In a book that focuses so heavily on the law, it's extremely disappointing to hear a narrator flub the pronunciation of a Supreme Court justice's name. It's skuh-LEE-uh, not SKA-lee-uh. 😖