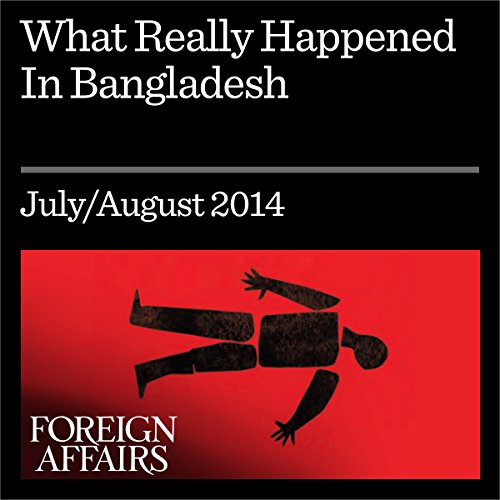 What Really Happened in Bangladesh

By: Harold H. Saunders
Narrated by: Kevin Stillwell
Try for $0.00

In 1971, the Pakistani government orchestrated a brutal military crackdown against the Bengali population in East Pakistan - while the United States stuck by its ally Pakistan. Gary Bass' new book spotlights the "significant complicity" of U.S. President Richard Nixon and his national security adviser, Henry Kissinger, in this "forgotten genocide".

What listeners say about What Really Happened in Bangladesh

Quick guide to creation of Bangladesh

What made the experience of listening to What Really Happened in Bangladesh the most enjoyable?

The narration was good and hence uplifts the overall book

What other book might you compare What Really Happened in Bangladesh to and why?

This is a short book to compare with others. Magnificent Delusions by Husain Haqqani does cover this subject in more detail.

Have you listened to any of Kevin Stillwell’s other performances before? How does this one compare?

Nixon and Kissinger's partnership in turning a blind eye to the genocide.

It is too brief to explain anything meaningful. This was a big historical event but wrapping in the 24 minutes will never give the whole picture and will confuse the listeners.

Certainly worth a listen about a fascinating subject that most people would probably know little about.
It could be argued that it should have been a bit longer, giving more 'flesh to the bones' on such topic.