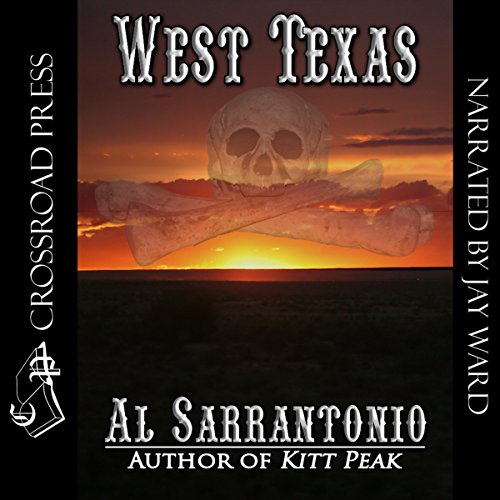 Lieutenant Thomas Mullin may be retired from the U.S. Calvary, but he's still considered the best tracker around. So when a senator's son turns up missing, Mullin is the man called upon to find him. It doesn't take long for Mullin to figure out that quite a few travelers and cowboys have disappeared recently in the same area. And the desolate, inhospitable land is offering no clues - only shallow graves. As he investigates further, Mullin finds himself pitted against a killer stranger and deadlier than any he's faced before.

What listeners say about West Texas

Summary:
Former Lieutenant Thomas Mullin is retired (unwillingly) from the US army just after the Civil War. He still has excellent tracking skills, so when a senator’s son goes missing, he’s asked to find out what happened to the boy.

Additional Comments:
• The title fits! It’s not very imaginative, and I can think of about a dozen that would suit the story better, but eh, it’s functional.
• This is a period piece, so there are language and attitudes concerning race relations that may offend some sensitive souls. of the characters, especially the villains, are blatantly racist. That’s pretty much the crux of the entire plot. If you think such a thing may give you heart palpitations, avoid this book. If that won’t bother you, give the book a shot.
• It’s classic Western, though (thankfully) not a wagon train romance.
• It features a deranged serial killer, so expect some violence.
• Performance is good. I found the voice used for the killer especially irksome, but that’s a personal preference thing. The majority of the book was spoken in deep cowboy mode of voice, which worked out well.
• The side sections about Reeves’ mini adventures were exciting. Mullin’s obsession with Sherlock Holmes was fun to witness.
• Fairly clean, but expect some violence.

Conclusion:
If you’re in the mood for a Western rough and tumble kind of story, this should work for you.

This was a good quick western to listen to. I thought the narrator did a good job