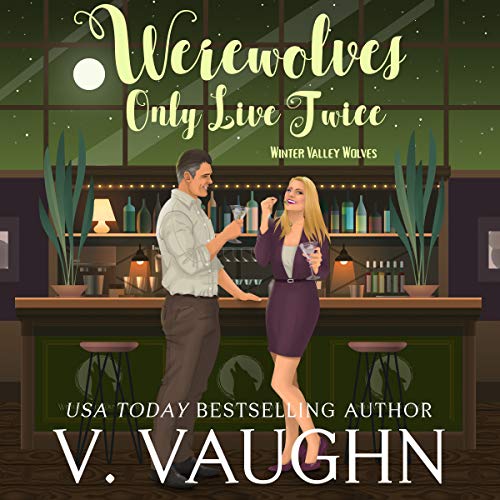 Caroline Quinn writes romance, so you'd think it would be easy for her to do relationships. The truth is that while she can give any heroine a happy ending, after decades of being a single mother who swore off men, she struggles to find a guy she wants to date. Although, there's one sexy werewolf she's interested in, but after one fun afternoon on the lake, Paul Ryan left her high and dry. When he's suddenly around at every turn, she discovers there's a reason she can't keep him out of her dreams. Now she has to decide if fate's plan for her is worth the risk.

Paul Ryan is the alpha of the Silver Lake Wolves and without a mate. When he met Caroline Quinn, all his senses buzzed with the electricity he used to feel for his late true mate. But he wasn't ready for a second chance and let Caroline go. When Paul runs into her months later, he can't resist the pull of their fate, and he doesn't want to. All he has to do now is convince Caroline they're meant to be.

What listeners say about Werewolves Only Live Twice

When does Caroline get to experience love???

What made the experience of listening to Fated the most enjoyable?

I loved being able to be immersed in the lives of the Winter Valley Wolf pack pack, I especially loved listening to Alpha Paul & Caroline finally start to flirt for real.

How Alpha Paul, even though he'd been in mourning, couldn't keep his mind off of Caroline... but he wasn't ready yet for what they could have had.

Fav scene... hmmm.... when Caroline is at the supermarket looking her best (she'd been busy writing & very comfortable) when she spots Alpha Paul & the interraction that occurs there.

I DID listen to this all in 1 sitting.

I really loved listening to this audiobook, it made me laugh & cry... but possibly that could have been because I'd read the book prior to listening. I would love to listen to more from this book, author & narrator.

Ok, I liked this one

Caroline reminds me of myself in some ways. Sadly. Just exaggerated. So maybe there's hope for me? Lol we'll see

Such a wonderful audio

I had received this for on honest review. Romona Master is such an amazing narrator and did such a wonderful job with this book. I just love this series. The Silver Lake Wolves have a special place in my heart. When you read this series you cannot help but fall in love with each and everyone one of the characters. Another thing I love about this series is each and every one is a standalone.

I actually found this book quite special. In the previous book we were introduced to Caroline Quinn and I had hoped we would see an upcoming book about her and Paul Ryan. If you had read the previous series then you are probably already in love with Paul Ryan. He is truly an amazing Alpha.

Paul is the Alpha of the Silver Lake Wolves pack. People that do not know him might look at him as boring. All they would see is a man who owns the local jewelry store, but he is so much more. Being Alpha takes a lot. It takes a lot of one’s time. They must be an understand person and at the same time be compassionate when needed. They must know how to lead and always put the pack first. Paul Ryan was all this and so much more. He had suffered the loss of his fated mate. Now here is fate giving him a second chance. I think Karma paid him back in 10 folds for all the good that he has done.

I loved meeting Caroline’s sister Sophie in this book. She had this fun loving spirit. I loved the fact she did not care the tell Caroline what she thought in a heartbeat. Caroline is not going to make things easy on Paul. Paul truly has his work cut out for him. Caroline keeps wanting to push Paul away. Can Sophie and Trixie keep Caroline from making the worst mistake of her life?

It is never too late for love.

Would you consider the audio edition of Fated to be better than the print version?

I loved both. I read the book first then a few months later listened. It was really a fun book in both versions. I especially liked her embarrassing situations in the audio.

What was one of the most memorable moments of Fated?

I loved Paul walking up while she was using the color of her underwear to help her make a decision. "Checking to see if you had on underwear?" was enough to turn her cheeks to a very sunburned tinge.

Which character – as performed by Ramona Master – was your favorite?

This was such a fun book. A romance writer with no love life. A feisty sister pushing her into living again, a hot guy interested. All the makings of a great read or listen.

One thing I really enjoyed was the little more mature age of the couple. High school loves and college lovers can become old for those of us who are old. She was a mother of a married daughter and on her second time around with a guy in a similar situation. It was a fun read too.