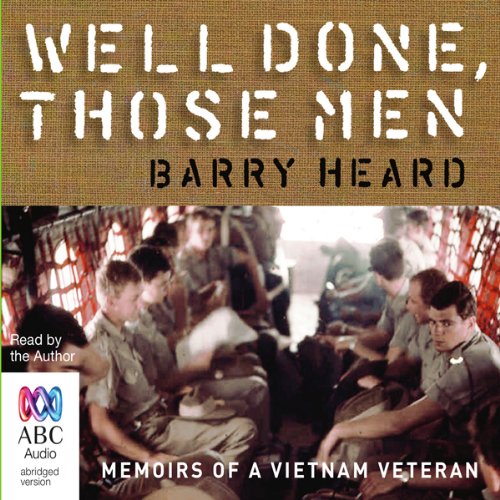 In this intensely personal account, Barry Heard draws on his own experiences as a young conscript, along with those of his comrades, to look back at life before, during, and after the Vietnam War. The result is a sympathetic vision of a group of young men who were sent off to war completely unprepared for the emotional and psychological impact it would have on them. It is also a vivid and honest portrayal of the author’s post-war, slow-motion breakdown, and how he dealt with it.

Well Done, Those Men attempts to make sense of what Vietnam did to the soldiers who fought there. It deals with the comic absurdity of their military training and the horror of the war they fought, and is unforgettably moving in recounting what happened to Barry and his comrades when they returned home to Australia.

"As devastating as Heard’s account of the war undoubtedly is, it’s the last third of the book - wherein he returns to a country that seems embarrassed to acknowledge his existence, and tries to deal with his shattered psyche with little support from an uncomprehending family and an ever-decreasing number of friends - that packs the biggest emotional wallop... (However) he manages to elicit laughs amidst the tragedy." ( The Courier Mail)

What listeners say about Well Done Those Men

My dad told me to read the book. So I listened.
Portrait of my late fathers life. Proud son of a Vietnam vet.

3rd time with more to come

Read it twice, and now listened to it.

we all love you Baz. thank you

Recommended to Me By Vietnam vets

A true to life as could be they have told me. I now have more of a understanding. Of course not complete as I was not there, but I trust in the vets and their recommendation. Thankyou

This book is the Best PTSD description I've ever read and now listened to, I encourage all Vet's and emergency service personal to read/listen to it