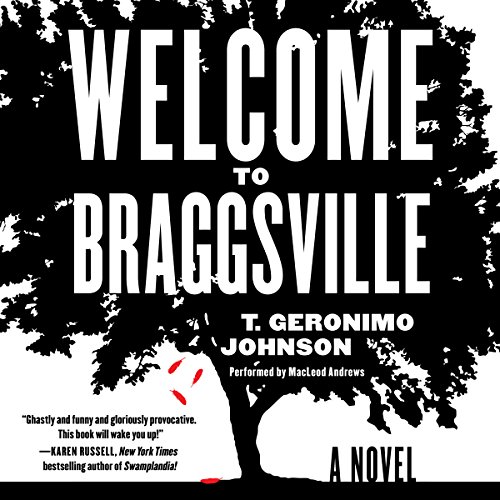 By: T. Geronimo Johnson
Narrated by: MacLeod Andrews
Try for $0.00

From the PEN/Faulkner finalist and critically acclaimed author of Hold It ’Til It Hurts comes a dark and socially provocative Southern-fried comedy about four UC Berkeley students who stage a dramatic protest during a Civil War reenactment--a fierce, funny, tragic work from a bold new writer.

Welcome to Braggsville. The City that Love Built in the Heart of Georgia. Population 712.

Born and raised in the heart of old Dixie, D'aron Davenport finds himself in unfamiliar territory his freshman year at UC Berkeley. Two thousand miles and a world away from his childhood, he is a small-town fish floundering in the depths of a large, hyperliberal pond. Caught between the prosaic values of his rural hometown and the intellectualized, multicultural cosmopolitanism of Berzerkeley, the 19-year-old white kid is uncertain about his place until one disastrous party brings him three idiosyncratic best friends: Louis, a "kung-fu comedian" from California; Candice, an earnest do-gooder claiming Native roots from Iowa; and Charlie, an introspective inner-city black teen from Chicago. They dub themselves the "4 Little Indians".

But everything changes in the group's alternative history class, when D'aron lets slip that his hometown hosts an annual Civil War reenactment, recently rebranded "Patriot Days". His announcement is met with righteous indignation and inspires Candice to suggest a "performative intervention" to protest the reenactment. Armed with youthful self-importance, makeshift slave costumes, righteous zeal, and their own misguided ideas about the South, the 4 Little Indians descend on Braggsville. Their journey through backwoods churches, backroom politics, Waffle Houses, and drunken family barbecues is uproarious to start but will have devastating consequences.

"Narrator MacLeod Andrews captures the essence of the audiobook with a slow delivery full of gravitas. His voice expresses knowing sarcasm and hints at the story's comic darkness. He does an excellent job performing the many accents; his voice is clear and his tone atmospheric. It's a great book and a terrific performance." ( AudioFile)

What listeners say about Welcome to Braggsville

This was a really interesting examination of race-relations, culture, privilege, sexuality, and education. The premise was really solid and the some of the themes were examined well. At times though it felt as though this book was trying to hard to make it's point. It's tangets and attempts at meta analysis worked against it's overall impact. So good but not great.

Flashes of brilliance, narration not so brilliant

There were so many flashes of brilliance in this novel, so many parts so funny I laughed out loud, so many parts so sad I ached. Yet somehow, the story as a whole got off the tracks and I found myself really bored by the end.

But the first paragraph! That first paragraph contains what might be the very best character introduction ever written. In it, the author summarizes the life story of the main character’s life up until he goes to college in one glorious, rapping, poetry slam of a run-on sentence:

“D’aron the Daring, Derring, Derring-do, stealing base, christened D’aron Little May Davenport, DD to Nana, initials smothered in Southern-fried kisses, dat Wigga D who like Jay Z aw-ite, who’s down, Scots-Irish it is, D’aron because you’re brave says Dad, No, D’aron because you’re daddy’s daddy was David and then there was mines who was named Aaron, Doo-doo after cousin Quint blew thirty-six months in vo-tech on a straight-arm bid and they cruised out to Little Gorge glugging Green Grenades and read three years’ worth of birthday cards, Little Mays when he hit those three homers in the Pee Wee playoff, Dookie according to his aunt Boo (spiteful she was, misery indeed loves company), Mr. Hanky when they discovered he TIVOed ‘Battlestar Galactica,’ Faggot when he hugged John Meer in third grade, Faggot again when he drew hearts on everyone’s Valentine’s Day cards in fourth grade, Dim Dong-Dong when he undressed in the wrong dressing room because he daren’t venture into the dark end of the gym, Philadelphia Freedom when he was caught clicking heels to that song (Tony thought he was clever with that one), Mr. Davenport when he won the school’s debate contest in eighth grade, Faggot again when he won the school’s debate contest in eighth grade, Faggot again more times than he cared to remember, especially the summer he returned from Chicago sporting a new Midwest accent, harder on the vowels and consonants alike, but sociable, played well with others that accent did, Faggot again when he cried at the end of ‘WALL-E,’ Donut Hole when he started to swell in ninth grade, Donut Black Hole when he continued to put on weight in tenth grade (Tony thought he was really clever with that one), Buttercup when they caught him gardening, Hippie when he stopped hunting, Faggot again when he became a vegetarian and started wearing a MEAT IS MURDER pin (Oh yeah, why you craving mine then?), Faggot again when he broke down in class over being called Faggot, Sissy after that, whispered, smothered in sniggers almost hidden, Ron-Ron by the high school debate team coach because he danced like a cross between Morrissey and some fat old black guy (WTF?) in some old-ass show called ‘What’s Happening!!’, Brainiac when he aced the PSATs for his region, Turd Nerd when he hung with Jo-Jo and the Black Bruiser, D’ron Da’ron, D’aron, sweet simple Daron the first few minutes of the first class of the first day of college.”

[I listened to this as an audio book performed by MacLeod Andrews. I wish the performer had differentiated between the voices of the characters a bit more. At times it was hard to tell who was talking. I think I might have enjoyed this book more if I had read it.]

WAS THIS SOMEONE'S THESIS?

No. The book read like a thesis gone off track. It was preachy with characters who were themselves stereotypes.

The book was interesting when it described student life at Berkley. The least interesting were the diatribes against everyone who was not like-minded.

Which character – as performed by MacLeod Andrews – was your favorite?

None of the characters were particularly interesting.

No. The book barely had a story. A movie would be boring.

Interesting idea for a story turned into wordy mini sermons that did little to move story and much to confuse and/or bore listener.

I even went to UC Berkeley, but...

I thought this book would be right up my alley. I went to UC Berkeley and teach US history, my favorite part is teaching the Civil Rights movement and injustices throughout the US. However, I just could not make it through this book. I gave it a good shot, almost 3/4 through and just had to stop.

What I liked: I related to everything about the Berkeley campus and the Bay. The feelings the main character had about being at Berkeley as a student were very accurate and relatable. It was great hearing the author refer to certain streets and buildings.

The narrator was ok.

Brilliant contemporary take on life for those who grew up in and moved on from their granddaddy's South.