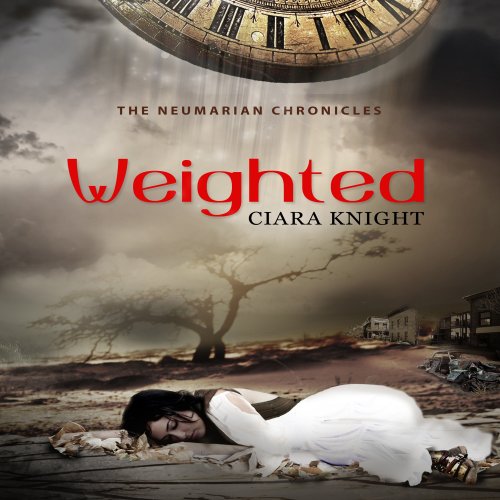 By: Ciara Knight
Narrated by: Kimberly Woods
Try for $0.00

"The Great War of 2185 is over, but my nightmare has just begun. I am being held captive in the Queen’s ship awaiting interrogation. My only possible ally is the princess, but I’m unsure if she is really my friend or a trap set by the Queen to fool me into sharing the secret of my gift. A gift I keep hidden even from myself. It swirls inside my body begging for release, but it is the one thing the Queen can never discover. Will I have the strength to keep the secret? I’ll know the answer soon. If the stories are true about the interrogators, I’ll either be dead or a traitor to my people by morning."

What listeners say about Weighted

Dark and Gritty YA steampunk

First off, I'd like to amend my star ratings ever so slightly. I would have given both performance and story 3.5, not four. But this should not be seen as an indication that this is a lackluster or milquetoast piece of writing. Ciara Knight's Neumarian Chronicles prequel Weighted, is neither high literature nor the best YA steampunk I have ever read, but neither is it the worst I have read by a long mile. However, I erred on the side of four stars, because unlike most YA steampunk I have read, it is dark and gritty, and will appeal to readers who prefer their black marks on white pages (or audio between the silences) to inhabit the shadows, not the light.

Barring its fast-paced and thrilling conclusion, Weighted could be adapted for small stage theatre, since the majority of the action takes place in a torture chamber on board an airship. A young girl who possesses supernatural powers has been captured by a wicked cyborg nation, and is being slowly converted into her enemy, part by part. This is nothing new, of course: the opposition of tech to magic is common in steampunk fantasy. Likewise, the torture chamber of cyborg transformation is common in general SF. However, we must always remember that for YA readers, such cliches are often new experiences, and many young readers are loathe to read the "classics" their parents did. Consequently, YA readers may find Weighted a challenging and provocative read/listen, since steampunk adventures about princesses and star-crossed love (which is where the series goes from here) do not often begin with torture.

Some listeners will find Kimberly Woods' reading of the text too childlike, but my own experience was that this helped immensely, given that the two key characters were both young teens. Too often, narration is given to voices far too old to convey the innocence of young characters. Given the horror that the heroine must endure, it's even more effective.

Many steampunk books mistakenly promise dark and grit, but deliver "action that often takes place at night and has lots of people who need a bath." Ciara Knight actually delivers on the promise of dark and gritty steampunk, and it was a refreshing change from steampunk's seemingly endless stream of romantic adventure tales.

The bottom line of any review is the question of whether I'm hooked as the reader. I was hooked into this single story within the first few minutes of listening. And given how this prequel leads into the larger story cycle of the Neumarian Chronicles, I'm hooked into the series as well. Or to be more accurate, reviewing this as a 42-year-old-academic recalling what I thrilled to as a young reader, I know that the 14-year-old in me is interested in seeing where this series goes. Weighted is a very promising start to an intriguing and genuinely dark and gritty steampunk world.