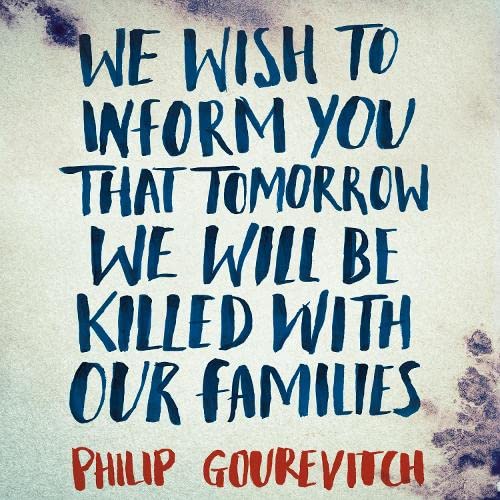 With an introduction by Rory Stewart.

Winner of the Guardian First Book award, a first-hand account of one of the defining outrages of modern history.

All at once, as it seemed, something we could have only imagined was upon us - and we could still only imagine it. This is what fascinates me most in existence: the peculiar necessity of imagining what is, in fact, real.

In 1994, the Rwandan government orchestrated a campaign of extermination, in which everyone in the Hutu majority was called upon to murder everyone in the Tutsi minority. Close to a million people were slaughtered in a hundred days, and the rest of the world did nothing to stop it. A year later, Philip Gourevitch went to Rwanda to investigate the most unambiguous genocide since Hitler's war against the Jews.

Hailed by the Guardian as one of the hundred greatest nonfiction books of all time, We Wish to Inform You That Tomorrow We Will Be Killed with Our Families is a firsthand account one of the defining outrages of modern history, an unforgettable anatomy of Rwanda's decimation. As riveting as it is moving, it is a profound reckoning with humanity's betrayal and its perseverance.

I read this when it first came out but relistening to it now it has lost none of its power. An unsparing look at the worst of human nature and the failures of the international community but also filled with stories of resilience and courage. A powerful book. Highly recommended.

Harrowing and painful, yet brilliantly written.

A difficult book about a difficult period of history in a part of the world I fear most are ignorant of today.
It's history and examples of human behaviour like this that should be mandatory taught to everyone.
To forget or ignore mankind's evil, is to be complicit in evil.

This conflict was so under reported at the time and since and really was the most horrific civil war, incited by those who should know better. I found Mr Gourevitch's account moving and poignant and commend him from his work in documenting this time. Authors who narrate their own books can come a cropper, but not so in this case. A must listen for everyone.