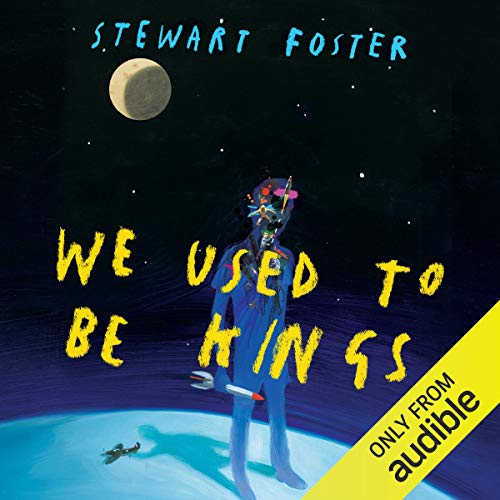 We Used to Be Kings

We Used to Be Kings

Six years ago Tom's brother died. The next day he came back.

It's Tom and Jack's 18th birthday, but it isn't a cause for celebration. For the past three years they've been in a care home for troubled children, a place where Dr Smith tries to silence the voice of Jack in Tom's head. But Tom doesn't want that. He's already lost his brother once, he's not going to lose him again.

And so, when they go in front of the review board, they will have to pretend Jack has gone so they won't be sent to the Young Men's Institution or they'll have to escape. Because one way or another they've got to get out of this place. They've got to be free, they've got to remember everything that happened to them, to their mum, and to their dad. They have to find their dad, whom they haven't seen since he left on a space mission to the moon when they were young.

We Used To Be Kings is the story of a young boy's descent into madness following the loss of everything he knows. Set in the 1970s, it is reminiscent of unusually hot summers, pictures of Russians in space and war on our doorstep. It's an audacious, at times hilarious story - and, ultimately, heartbreakingly unforgettable.

Stewart Foster lives in Wiltshire and is married with two children. We Used to be Kings is his first novel.

“Fresh and original, a sparse and moving tale that's never showy but often dazzling” (Tim Lewis, The Observer)
“There’s so much to love in this book, he’s such a beautiful, crisp writer. For a first book it’s really amazing.” (Mark Ravenhill, Review Show (BBC Four))

I have had a very hard time finding the words to review this book. It is so well written with characters that travel in your head even when you’re not listening. Traveling with Tom who carries Jack in his head as they get away from their care home to try to find their dad. And, through Tom’s thoughts, going back to the times before everything went wrong, seeing a warm and close family where the young boys felt safe and loved, but with a shadow already gathering overhead. Throughout the story you have the inescapable dread of how that shadow would spread, of how well intentioned decisions to shield the boys from sad, hard truths actually set disastrous events in motion that could never be taken back.

The narration could have been very tricky, but was handled brilliantly. Shifting constantly between Tom’s 18 year old voice and Jack’s 10 year old voice as they competed to tell the story, and as Jack tried so hard to be heard in spite of Tom’s efforts to restrain him. Their interactions defined Tom’s struggle between maintaining old delusions and facing tragic truths. This is not a light story. It has weighed on me over the several days since I finished it. But if I can’t say I enjoyed it in the entertaining sense, I can say that I admire its bravery and uniqueness.

What made the experience of listening to We Used to Be Kings the most enjoyable?

I'm not sure if you could say this book was enjoyable..but it was very good (in my opinion) It was a very sad depiction of a mentally ill boy who had experienced devastating loss in his young life. This story was quite unique. I havent read anything like this before. Told partly in first person we experienced first hand what it would be like to have another 'voice in your head' I did find it at times a little amusing, visualising this 18 year old boy man talking to himself as an 18 year old and with the voice of his brother a 10 year old.

Tom...who was Jack who was Tom

He was very clever in differentiating the two characters one the 18 year old and the other the 10 year old..I was not confused at all who was talking

I did like this book..it has kind of haunted me. Depressing and sad..very well preformed and written!

the performance was great, but the story didn't grab me. it wasn't terrible, at times engaging.

Would you consider the audio edition of We Used to Be Kings to be better than the print version?

I imagine the audio version would be better than print because the narrator brings the voices to life and knowing who is speaking could be confusing in the book.

Tom was my favourite character as you could understand his struggles of wanting to be free to lead a normal life yet not want to be free of what makes him abnormal.

Have you listened to any of Tom Lawrence’s other performances? How does this one compare?

I haven't but I definitely would in the future.

I feel the last few chapters gave the most insight and were brilliant. It would be hard to not be moved by what the characters had been through and their final solution.

I listening to We Used to be Kings straight after I finished reading The Shock of the Fall, so the similarities were obvious although it cannot be said that the stories are the same at all. If you enjoyed one, you would enjoy the other. Overall, this was a profound story which was great to hear unravel. It was equally light and dark. I didn't give the book 5 simply because I felt too much time was given to some sections, but this is understandable due to Jack haha.

If you could sum up We Used to Be Kings in three words, what would they be?

a very good listen and a wake up call for understanding and not placing value judgements on the mentally ill.

An unusual angle for a story.I liked the way the author put me inside the head of the elder brother. It enabled me to see how "normal" it was for him but also what it appeared like to others. The development as to why he developed such a condition is heart wrenching. It certainly will make one sympathise with people in similar conditions.

His ability to communicate the difference in thought and maturity between the different ages of the brothers made them very real.The voice changes for various characters were smooth and natural. An excellent reader. I will seek out more of his readings.

The conversations between the two main characters could sometimes be quite funny. Little jokes that would naturally go on between siblings.The reveal of the brothers condition was a surprise and one can feel the trauma of the elder brother.

A very special book about love and madness

This is a deceptively simple story told through the eyes of a young man who has been driven mad by events in his life. Despite the subject matter it is full of warmth and love and even moments of great humour. This is a stunning debut novel and as somebody who was a teenager in the 70's I can completely vouch for the authenticity of the setting. If you want to read something that is brave and honest this is highly recommended. The relationship between the young brothers and their father will stay with me for years to come.

Would you consider the audio edition of We Used to Be Kings to be better than the print version?

I am not sure about this.

What was one of the most memorable moments of We Used to Be Kings?

Which character – as performed by Tom Lawrence – was your favourite?

No and who has the time for one sitting?!