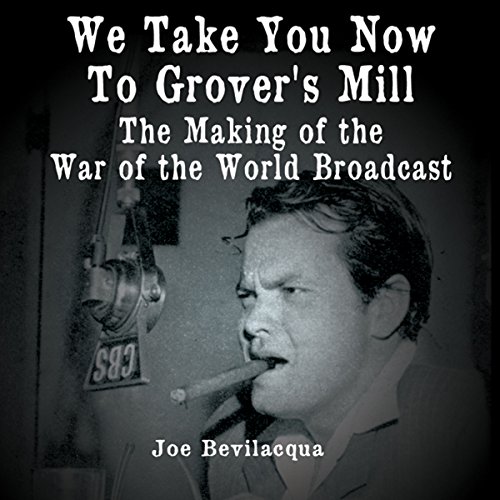 We Take You Now to Grover's Mill

We Take You Now to Grover's Mill

As heard on Sirius XM Radio and NPR stations!

We Take You Now To Grover's Mill: The Making of the War of the Worlds Broadcast, written, produced, directed, and narrated by Joe Bevilacqua.

In this 1988 documentary, award-winning NPR producer Joe Bevilacqua looks at how the landmark broadcast came about and examines its impact on broadcast history. The half-hour program includes rare interviews with Mercury Theater producer John Houseman and writer Howard Koch, actor Arthur Anderson, and the people of Grover's Mill, New Jersey, who lived through the "Martian invasion".

" The Making of the War of the Worlds Broadcast is engaging, informational, and sound rich. This program, like the original War of the Worlds, rates a listen. Thankfully, the producer interviewed WOW producer John Housman not long before he died [on the 50th anniversary of the landmark broadcast, Halloween of 1988]. The story of this legendary Orson Welles broadcast is for the most part allowed to unfold through descriptions by Housman, and writer Howard Koch, along with voices recorded at Grover’s Mills’ 50th anniversary event. You can hear traces of amazement in the voices of people who heard that broadcast 70 years ago. Housman, reflecting 20 years ago on why the program still holds fascination, said: 'It's history. It’s one of the great events of the new age of mass communications.' True still." (Sydney Lewis, Atlantic Public Media)

This recording has no pizzazz. It's very dry.
Some of the information is interesting, but it would be better on paper. Listening to it is a snooze.

Fascinating behind the scenes

Where does We Take You Now to Grover's Mill rank among all the audiobooks you’ve listened to so far?

Rather good, but not a favorite

Everyone. The stories they told about working on the broadcast were very interesting.

I can't think of one I'm afraid.

A must-have for any fans of old time radio shows.

This is not a copy of the broadcast. This is an interview not worth 5 cents.