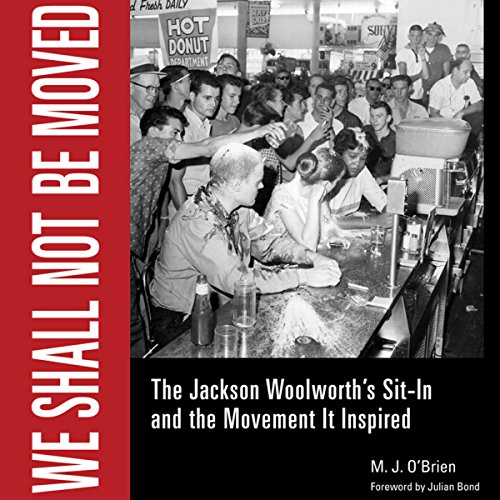 We Shall Not Be Moved

Once in a great while, a certain photograph captures the essence of an era: Three people - one black and two white - demonstrate for equality at a lunch counter while a horde of cigarette-smoking hotshots pour catsup, sugar, and other condiments on the protesters' heads and down their backs. This iconic image strikes a chord for all who lived through those turbulent times of a changing America.

The photograph, which plays a central role in the audiobook's perspectives from frontline participants, caught a moment when the raw virulence of racism crashed against the defiance of visionaries. Sadly, this same sit-in and the protest events it inspired led to the assassination of Medgar Evers, who was leading the charge in Jackson for the NAACP.

We Shall Not Be Moved puts the Jackson Woolworth's sit-in into historical context. Part multifaceted biography, part well-researched history, this gripping narrative explores the hearts and minds of those participating in this harrowing sit-in experience. It was a demonstration without precedent in Mississippi - one that set the stage for much that would follow in the changing dynamics of the state's racial politics, particularly in its capital city.

The book is published by the University Press of Mississippi.

"Michael O'Brien has written a detailed history and fascinating study of one of the iconic moments of the modern civil rights movement and the powerful effect it had... Readers will enjoy this behind-the-scenes look at an important event in movement history." (From the foreword by Julian Bond, chairman emeritus, NAACP)
"It's all here: solid research, relevant history, honed prose. Masterpiece is not too grand a word to describe the excellence of M. J. O'Brien's enduring work." (Colman McCarthy, former columnist for the Washington Post and now director, Center for Teaching Peace, Washington, D.C.)

What listeners say about We Shall Not Be Moved