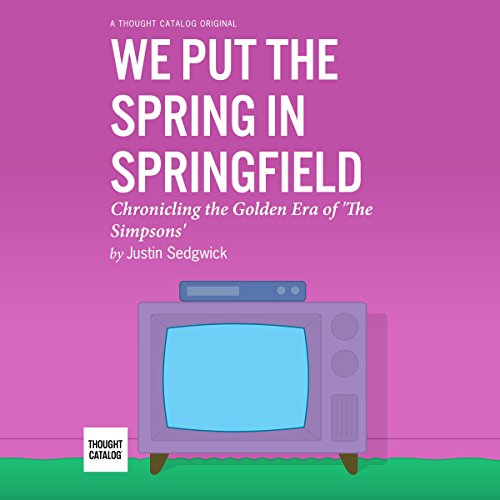 We Put the Spring in Springfield

By: Justin Sedgwick
Narrated by: Peter Berkrot
Try for $0.00

We Put the Spring in Springfield: Chronicling the Golden Era of The Simpsons is a detailed study into the quirky intangible factors that lead to the rise and fall of The Simpsons' phenomenal early years. From Michael Jackson's bizarre guest appearance that kickstarted the golden era to the death of Maude Flanders and all the Conan O'Brien throwaway gags, Phil Hartman guest voices, extensive movie references and encore-worthy musical numbers in between, We Put the Spring in Springfield serves as the perfect companion guide to the Simpsons' golden years and delves into the particular elements that made seasons 3-8 so magical. For anyone who was religiously watching FOX Sunday nights throughout the 1990's or just happened to borrow the season 3-8 DVDs from a friend, We Put the Spring in Springfield is a must-listen, promising to make a Simpson out of all of us.

What listeners say about We Put the Spring in Springfield

I wasn't sure what to expect from this book, but with the low price and being a huge Simpsons fan, I took a chance on it. I'm very glad I did!

The book is a vehicle for the author to look back nostalgically on The Simpsons, particularly the "early years", share a lot of thoughts about it, and relive some of the greatest moments. He talks about a number of the early seasons as the "golden era", and gives a surprisingly astute and interesting analysis as to why he thinks that. Backing that up by describing many of those early shows, what makes them special, and talks in-depth about the stories, the characters, the creative talent, and the music, that makes the Simpsons so memorable.

It's definitely a fun little read, and Simpson's fans will certainly enjoy it.

Better off just watching the Simpson’s

If you like the Simpson’s, do not listen to this. Too much argle bargle about a funny cartoon show.

If you thought about bingeing on the Simpson’s, like I was, because you’ve watched most but not all the episodes, this will definitely destroy that idea.

As a Simpsons fan from the beginning, I was looking to hear stories about the "golden era" of the show. This book is not well researched, containing some obvious mistakes (such as confusing the Treehouse of Horrors classics "Nightmare at 5 1/2 Feet" and "Clown Without Pity", and not knowing that the Simpsons were created because Mat Groening did not want to give the Tracey Ullman Show and FOX the rights to his already existing cartoon "Life In Hell"). Overall a very disappointing book.

“We Put The Spring in Springfield” was ok, only because it was short and free. Don’t expect to learn anything if you are a Simpsons fan. It’s basically a college theses from “Television 101” that somehow got published as a book.

A Short Recap of The Simpsons Greatest Hits

If you know The Simpsons well, you’re not going to learn anything from this, but it’s sort of like having a conversation with a fellow fan about favorite episodes. It’s also super short, so it’s a fun palate cleanser between longer books.
It does drive me crazy that the author misattributes quotes and gets many of them slightly wrong, but maybe I should write my own book if that bothers me too much.
That said, I would highly recommend Mike Reiss’s Springfield Confidential to anyone who really wants to dive into the behind the scenes of The Simpsons. It is written by one of the key creatives of the show and is full of anecdotes that go way beyond trivia and reruns.

Even if you agree with the author that Simpsons seasons 3-8 represent their Golden Age, this is just the author getting misty-eyed as he recounts his favorite episodes. The audio commentaries on the DVDs of these seasons are a million times better.

If you’ve consumed any Simpsons discourse over the years, you won’t hear anything you haven’t heard 100 times before. The author spends most of the book poorly describing episodes of the show. When he editorializes about what makes this era great, his takes miss the point and are internally inconsistent.

Just some guy's opinion about The Simpsons. No real trivia or interesting facts. Although it was well worth the price of free.

If you're going to have someone read a book about The Simpsons that's heavy on quotes and song lyrics, for god's sake, make certain the narrator has watched the show and heard said songs.