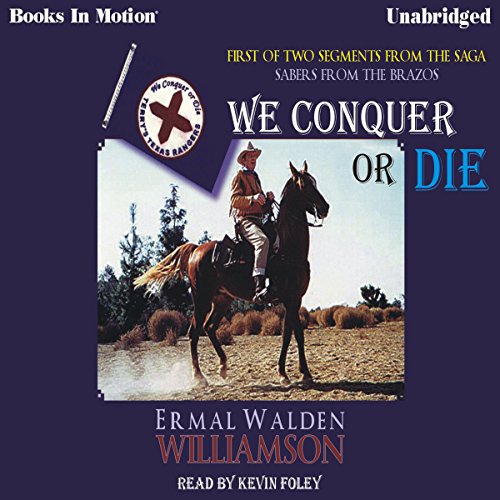 We Conquer or Die

We Conquer or Die

By: Ermal Walden Williamson
Narrated by: Kevin Foley
Free with a 30-day trial

Ginny was dead; killed by a young Federal soldier's musket ball that sent a call for revenge to Matt Jorgensen, a cowboy on the run from the law from Montana.

However, convinced that his sweetheart was still alive, he was determined to find her. Discovering himself deep in the heart of Texas when the Civil War broke out, Matt enlisted in the Texas 8th Cavalry with his newfound sidekick, Steve Andrews, only to find out that the cavalry had no horses and no authority to fight in the war.

This is the story of Terry's Texas Rangers and four officers who led them through victorious battles. Two men, Matt and Steve, who became heroes themselves, whipped the cavalry unit into shape to become the finest cavalry regiment on either side of the War. Matt and Steve's destiny seemed to be to keep the memory of these four brave Sabers alive, and to find Ginny at any cost.

What listeners say about We Conquer or Die