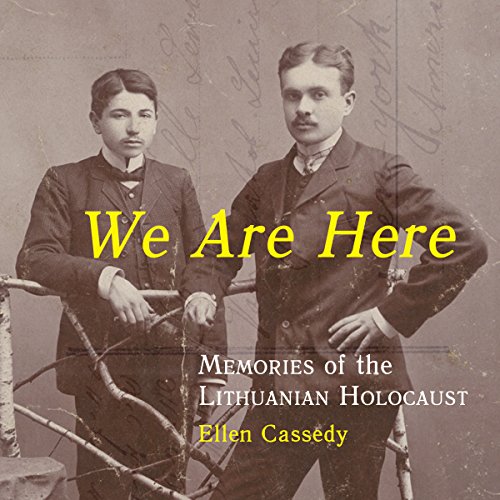 By: Ellen Cassedy
Narrated by: Suzanne Toren
Try for $0.00

Winner of the 2013 National Book Prize from Grub Street, the 2013 Towson Prize for Literature, the Silver Medal for History from the 2012 ForeWord Book of the Year Awards, the 2013 Prakhin International Literary Foundation Award, and the 2013-14 Best Book Award from the Association for the Advancement of Baltic Studies. Shortlisted for the 2014 Saroyan Prize.

Ellen Cassedy's longing to recover the Yiddish she'd lost with her mother's death eventually led her to Lithuania, and its capital, Vilnius, once the "Jerusalem of the North." As she prepared for her journey, her uncle, sixty years after he'd left Lithuania in a boxcar, made a shocking disclosure about his wartime experience, and an elderly man from her ancestral town made an unsettling request. Gradually, what had begun as a personal journey broadened into a larger exploration of how the people of this country, Jews and non-Jews alike, are confronting their past in order to move forward into the future. How does a nation - how do successor generations, moral beings - overcome a bloody past? How do we judge the bystanders, collaborators, perpetrators, rescuers, and ourselves? These are the questions Cassedy confronts in We Are Here, one woman's exploration of Lithuania's Jewish history combined with a personal exploration of her own family's place in it.

Digging through archives with the help of a local whose motives are puzzling to her; interviewing natives, including an old man who wants to "speak to a Jew" before he dies; discovering the complications encountered by a country that endured both Nazi and Soviet occupation - Cassedy finds that it's not just the facts of history that matter, but what we choose to do with them.

What listeners say about We Are Here

Personal, anecdotal, but a good effort

I would suggest it as a part of a larger set of works on the Holocaust but not as a stand-alone exemplar. The author is too credulous of Soviet sources, for example. It's understandable, given the apologist alternatives and shameful revisionism by the Lithuanians involved. But despite evidence demonstrating the lack of reliability of Soviet sources she treats the conflicting evidence as exceptions to Soviet reliability or looked to find some way to believe them anyway. It's understandable, given her apparent biases.

She imparts a proper amount of emotion for the subject - it's subdued with rising and falling tones appropriate to the subject matter.

"If you have to see one film about the Holocaust, watch Schindler's List. But if you watch two, watch We Are Here."

Less about Holocaust, more about author

This author has turned this book into a story about her, not enough about the Holocaust.