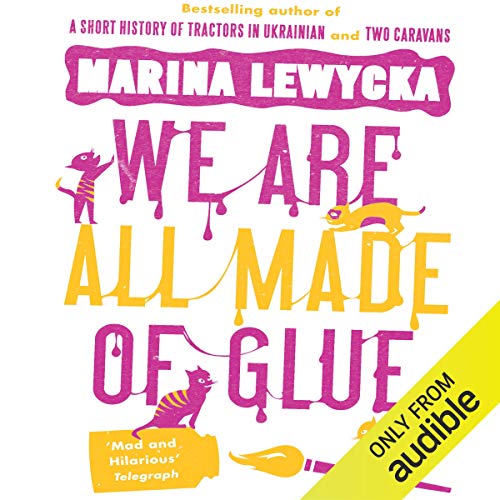 We Are All Made of Glue

By: Marina Lewycka
Narrated by: Sian Thomas
Try for $0.00

Georgie Sinclair’s husband has walked out and work is getting her down. So when she spots Mrs Shapiro, an eccentric old neighbour, rummaging through her skip in the middle of the night, it’s just the distraction she needs. And although they mistrust each other at first, a firm friendship is formed.

Then Mrs Shapiro is admitted to hospital and, to Georgie’s surprise, she is named as her next of kin. As Georgie steps in to help her new friend, she finds herself unravelling a mystery that takes her from Highbury to wartime Europe to the Middle East, and learning a bit about DIY along the way.

What listeners say about We Are All Made of Glue

Best in a long time

I bought this thinking it would pass the time on long journeys but found I was listening to it at every opportunity, it's simply too good to put down.
Every character is so memorable, there's twists and scandal, everything you want. Heartbreaking and hilarious I honestly think this will appeal to anyone.
One thing I must warn you though, like me, you'll probably get some funny looks for bursting into laughter in the street.
Enjoy!

This is a marvellous book which made me laugh out loud. The narrator does a brilliant job and brings the characters to life. Recommended for an excellent light hearted read.

My wife and I both thoroughly enjoyed this. I've previously read A Short History... and Two Caravans, but this was the first audio book of hers that I've listened to and it worked very well. It was well read, especially for a book with quite a lot of (brilliantly written) dialogue which some narrators don't manage to pull off.

I found the book more similar to A Short History... than Two Caravans, but as with her all work the main thread of the story happens almost in the background, hanging off the very three-dimensional characterisation of the protagonists.

What did you like most about We Are All Made of Glue?

Is it facile to put on parallell tracks the Palestinian/Israeli crisis and a marital/midlife one? Possibly. Is everything said with the over-arching conceit that the warmth of human comfort (if not love) is the only peaceable glue? Possibly! It’s true, after all, that we are all connected in a human collage. But finding the right glue for the job isn’t easy!

It would go way too far to suggest this book examines any such esoteric premises in further depth, or that it studies the Cainite Condition of the industrious warrior man (as opposed to the pastoral Abelite). Disregarding it’s hard core themes, lightly brushed upon, of terror, intolerance, bullying and indoctrination, it’s a comical, even in parts farcical, and not at all studious book! It examines nothing too closely and is rife with caricatures and clichés and old-hat story lines. But still: for a light-footed read, it’s just very readable/audible and I liked it.

The adhesive theme can become a little far fetched and is rather cheesy in parts: one ends up in a bit of a cheese-string cat’s cradle (more than one pun intended). Still, it keeps to an up-tempo pace and inserts healthy relativism into morbidly obese subjecs.

How do we end up glued together in a sometimes rather nasty tangle? What’s the covalency in human history? I ended up asking myself, what’s this thing called Karma and Fate if not a type of glue? The bonds seems so random, at times inevitable, at other times too fragile.

What other book might you compare We Are All Made of Glue to, and why?

It's a funny book, and a touch ironic about the human condition, without losing optimism, so think of Howard Jacobson or Ali Smith, only they are a lot more sophisticated as authors.

One odd comparison has to be explained as follows: I got confused, here and there, about which book I was in! But that may, actually, have helped me to like this one better: curiously, there are some strong correspondences (incl. themes and names) with the (infinitely superior) “The Door” by Magda Szabó, I had read a little while back. Both are narrated by Sian.

Perhaps the bulk of my appreciation is derived from the performance (and that’s the right word here) by Sian Thomas. Her voices/accents keep the characters alive, where they might otherwise have drowned in their self-indulgent dead-pans.

Despite there being no natural pause in the narrative, you never feel exhausted really. Sometimes a bit disappointed, but that's your problem for expecting more than an amusing read. But do you really want to hit a moralistic note with Jews and Muslims sat at the same table, building on the same house, cooking on the samebarbecue? Problem is: you may as yet!

There might be too much going on because the essence of the core theme (of love thy neighbour if you can) is hard to capture; so Lewycka choses to unfold a network of (the most unlikely) interconnections by means of rudimentary (rather one-dimensional) portraits rather than in-depth studies of people. How they happen to meet around a little old Jewish lady in Highbury can be quite bewildering, unless you allow yourself to be amused. It can become tedious how every loose end has to become neatly tied up (at whatever contrived cost!).

We meet people who are knocked back a bit (blame it on the break-ups), insecure (blame it on the age), plain dodgy (blame it on their jobs), caring and uncaring, long-term displaced, long-term (semi-) squatters, and just down-right bonkers as well as some implausible representatives of the two sides to the Palestinian/Israeli conflict. They may all go into one and the same illustration of how it takes every kind of people to make the world go round and that they all need the same amount of respect and understanding, but don’t we know that by now, already? If you are somebody who does know this only too well, you may find quite a few of the characters redundant and the stage feeling over-crowded.

Somehow successfully the humourous overtones and undertones sandwich together the otherwise fairly undigestable premise that there can be no resolution for the Palestinians and the Israelis; I commend how Lewycka (covertly) proposes that the Arab-Jewish antagonism is actually no different to any other type of (petty)selfrighteousness. Who gives anyone the right to believe they are better than anyone else? Why would it even ever be true?Granted there are additional complications since heinous crimes against humanity were committed - all round!…. Yet, sometimes we are wise to emphasise hope where we cannot hope to change much else. The comic notes, and Georgie’s down-to-earth (Yorkshire) character above all help to underline that it profits noone at all to take yourself too seriously.

Clearly this novel is not merely meant to be read like a Hollywood sitcom or the confessions of a woman in a midlife crisis, but it can smack a little too much of platitudes and even turn saccharine.

There are many behaviours and depictions that don’t feel in character somehow. It is not a non-sequitur in my middle-aged book that (the fairly self-conscious) Georgia suddenly would become sexually uninhibited and even voracious after a sudden (uneventful yet painful) separation from her husband of 20 years, shifting hormones notwithstanding. The portrait of the gay colleague and the obvious stop-gap in the plot that is his “tattie” (dad) has to fulfill is akwardly predictable and there are a few more suchlike conventional, silly, stereotypes throughout. But all this is perhaps permissible thanks to the downright farcical scenes (meticulously scripted, almost comicbook or cartoon-like).

There is not an essayistic or probing bone in this work, yet we find dotted about (from the mouth of the tentatively musing lead character) quite a few (open) questions on the nature of house/home(land) and meaningful priorities (work, war, ideals, loved ones).


Finally, may we take away some words of wisdom in the following: as the little old lady says: “it is beter to live in happiness” (than to dwell on the past). And we might do well to turn a blind eye to anything that appears to be the absolute truth (before it radicalizes us).

I thoroughly enjoyed this. The narrator was perfect and really managed the character voices and the nuances of their comments and conversation well: sarcasm, hurt, intrigue all came across. It is a story about love and relationships but is not a romance. I found it thought-provoking in parts and funny too. I also learned a lot but it isn't written to teach anything. I highly recommend it and will listen to and read again.

This is chicklit for middle-aged house wives. I so wanted it to me like a short history of ukrainian tractors. I gave it a couple of hours and then had to switch it off.

The narration is good, but the characters just don't seem realistic and the plot felt so dragged out. Also, I'm never a fan of books where the star character is also a writer, it shows lack of research into full rounded characters.

I just loved the story

The wonderful narrator only made it more wonderful. I've already downloaded the other books by this author and read by this narrator. A perfect combination.

What did you like most about We Are All Made of Glue?

The two main characters and their relationship

If you’ve listened to books by Marina Lewycka before, how does this one compare?

no, I have not

Have you listened to any of Sian Thomas’s other performances? How does this one compare?

no, I have not

A brilliant observation of the characters. I loved the story

wow! this was a surprise just loved it from start to finish
good girly listen

Take care of the elderly

This was a comedy so hopefully the way the elderly are treated by the Social Work and Estate Agents aren't as the book leads you to believe! In saying that the old lady had a great character, reminded me of my great aunt!

A woman finds herself coping with an absent husband, a troubled son and an elderly neighbour who gets into lots of scrapes after being deemed unfit to stay at home alone anymore.

The reader of this story is so talented. Her ability to create such authentic characters drew me into the story. This book will have you laughing, crying and thinking. One of my favourites.