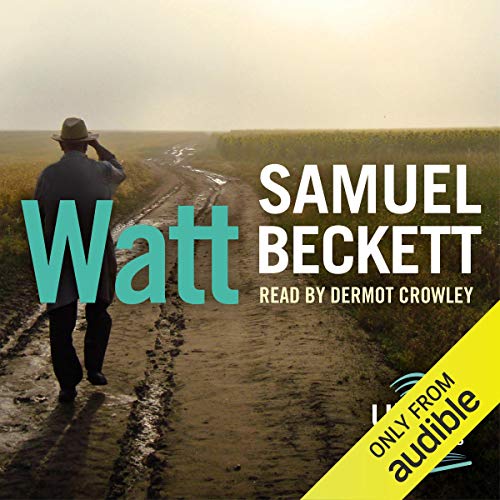 By: Samuel Beckett
Narrated by: Dermot Crowley
Try for $0.00

Written in Roussillon during World War Two, while Samuel Beckett was hiding from the Gestapo, Watt was first published in 1953. Beckett acknowledged that this comic novel unlike any other 'has its place in the series' - those masterpieces running from Murphy to the Trilogy, Waiting for Godot and beyond. It shares their sense of a world in crisis, their profound awareness of the paradoxes of being, and their distrust of the rational universe.

Watt tells the tale of Mr Knott's servant and his attempts to get to know his master. Watt's mistake is to derive the essence of his master from the accidentals of his being, and his painstakingly logical attempts to 'know' ultimately consign him to the asylum. Itself a critique of error, Watt has previously appeared in editions that are littered with mistakes, both major and minor.

The new Faber edition offers for the first time a corrected text based on a scholarly appraisal of the manuscripts and textual history. Watt is at times extremely funny, bizarre, allusive and richly poetic. Though 'early' Beckett, the novel shows the author to be a remarkable virtuoso, investing plot and pace with classical, intellectual and earthy content style.

Dermot Crowley proves himself a towering Beckett performer, matching clarity with flair; and with its musical surprises (arranged and conducted by Roger Marsh), the recording shows that, once again, a key Becket novel comes to life unforgettably in the audiobook medium.

What listeners say about Watt

Watt, for me, was a perplexing, difficult, yet ultimately fulfilling read. Jon Michaud writing in the New Yorker helped me place the work in Beckett's oeuvre. https://www.newyorker.com/books/second-read/the-alternative-facts-of-samuel-becketts-watt .

I sensed, as the story progressed Beckett's return to his powers. As if I, the reader, merely a witness to the senseless babble of Beckett's purgatory, ennui, doubt and guilt. So much nothing. His personal interregnum. Consciousness healing itself.

Then again, I could be wrong.

Dermot Crowley does a terrific job of rendering at once the meaning and the humor of Beckett's Watt. Watt is not an easy text, but, apart from its own depths, it serves as a kind of prelude to the masterpieces that follow it, like the "trilogy." It's both enjoyable and helpful to have a first-rate Irish reader carry us through. For anyone willing to tackle this challenging text, Crowley's rendering is a delight.

Beckett exhibits an interesting perspective writing for Watt, a very specific and thoughtful, methodical way of cateloging the world, which interests both the part of my brain that craves specific details and logic, my inner programmer, as well as the part of my mild that craves the child like ranting of songs like the 12 days of Christmas

If you could sum up Watt in three words, what would they be?

A difficult novel to read made easy by listening to it.

What other book might you compare Watt to, and why?

Murphy and How It Is. They are all challenging books to read and these audio recordings really open out the text.

I would like to hear some of Beckett's later novels and short prose on Audible. For instance Ill Seen Ill Said, Company, Worstward Ho! and The Lost Ones.

The right friend, absolutely. The performance is a work of art in its own right, and the text is so difficult, it's almost a sport to see what the narrator's going to do with it. What he does is offer this much under-represented text arguably (by me) its best medium.

Watt has some of Beckett's funniest writing, and there's a great sense of him working towards the inimitable trilogy. The performance here makes sense of the oceans of patterned text when you read it in hard copy, and Crowley brings fantastic light and shade to aid comprehension of the incomprehensible.

Have you listened to any of Dermot Crowley’s other performances? How does this one compare?

I listened to Dermot Crowley on Molloy, so I bought this one with confidence. His performance in Watt is comparable in excellence, but much more of a tour de force, because the text is even more difficult. He utterly brings it to life.

No, I wanted to take it all in in 'movements' -- it evolves and develops in the manner of classical music.

I'm so pleased to hear Crowley unleashed on Beckett again -- I'll certainly listen out for more from him.

Listening to Watt is a dream come true for me. The book can be hard going but hearing it read makes life a lot easier. Dermit Crowley deserves some sort of prize for even trying, and he brings the difficult text to life perfectly. Apart from Waiting for Godot, this is probably the easiest Beckett to engage with (notwithstanding that it is in itself difficult) so if you ever wondered what Beckett is like, this could be a good place to start. Caution - parts of it will do your head in!