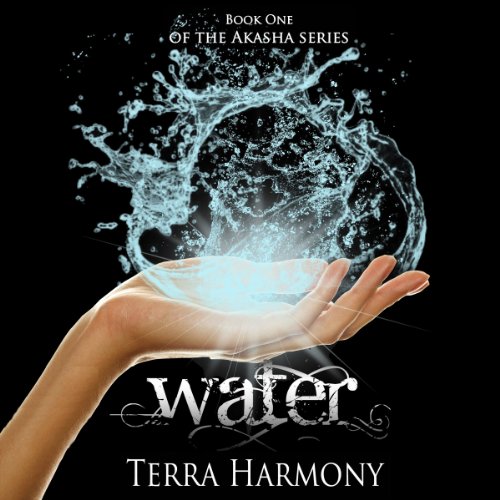 By: Terra Harmony
Narrated by: Emily Gittelman
Try for $0.00

Elemental powers in the palm of her hand… and it won't be enough to save her. When Kaitlyn Alder is involuntarily introduced to a life of magic, she becomes part of an organization hell-bent on saving the Earth. Her new found life holds promises of purpose, romance, and friendship, but the organization divides and a rogue member holds Kaitlyn hostage. Now one of the most terrifying men the human race has to offer stands between her and Earth's survival.

What listeners say about Water

I felt like everyone in the book had multiple personalities. The main character goes back and forth between "I'm not gonna put up with anyone's b.s." to "oh God, I'm so helpless that I'm not even gonna attempt to make my situation better, hit me harder please!". I couldn't pin a single character down. They all went between masculine and feminine, this personality to the next. If I even thought that I had a glimmer of a personality from a character, then they'd do something that didn't make any sense in the next instance. Who are these people?! I've finished this book and I still have no clue. It also didn't help that the reader had no acting skills whatsoever. She could play two characters, man and woman, that was about it, and even that she did poorly. And, oh God, her nasal speaking that came and went drove me nuts! People who talk through their noses (except maybe to play a single, certain character) should NOT read audiobooks!

The main character's humor was extremely corny and awkward and bizarrely inappropriate at crucial moments. In fact, I couldn't get involved in the most emotional moments of the story because she would make some stupid joke that made be want to slap her around as much as all the other characters in the book were. Speaking of which, holy crap! Does this author hate women or something? Considering it was written by a woman, I'd expect something different, but the only time that a woman in the story (usually the main character) was not being beaten, abused, or raped was when I wasn't reading the book. It was non-stop from the beginning to the end!

Oh, and the big rape scene! I can deal with an author wanting to deal with touchy or taboo subjects like rape. I can even deal with descriptive scenes of rape and murder and such. It was the way it was handled and her reaction afterwards that was too disturbing, and not in a purposeful literary sense, but rather in a very very bad writing sense (bad author, bad bad bad!). When this happened, the main character was apparently in one of her "I'm too helpless to try" situations, because the rapist just said,"you can make this hard or easy" and she was just like,"I'm NOT o.k. with this, but yeah, sure, let's go at it then!". Then after he violently has his way she's just like,"ouch, that hurt my lady-bits and I'm bleeding horribly now, oh well, I'm just really upset that he didn't *prepare* me". Then it's like it was ignored two seconds later. Not in a,"that's too painful to remember or think about" way, but more like it just never occurred or she just plain forgot, or worse, the author forgot ("Wait did I just write a horrible, disgusting, couldn't pry it from my memory with a crowbar-type rape scene into my book? I'm not sure, oh well, moving along!"). Then soon after he's gonna rape her again and her reaction this time is,"I'm so hurt and abused by this and have horrible cuts and soars from the last time, but I'm kinda horny, so I feel almost like begging him to continue." And then soon after it was forgotten again until she's laughing and joking with her abuser and he decides to pull out the candlestick. WHAT?! Wtf just happened! I almost felt like I had been violated in some horrible way just by listening to it. But she apparently goes on craving endless sex with her boyfriend immediately after this, so I guess it's all well and good "'cause he's gots dem purdy eyes". No harm no foul. "Just be gentle with my lady-bits, because the soars haven't quite healed yet". WHAT!? Wait...WHAT!? I guess the author couldn't be bothered to have an interruption in the sex scenes for the character to have any kind of human reaction to rape or something. I almost thought that she was about to say,"Hey boyfriend, the rapist had a great idea with a candlestick, I'm up for it if you're into something kinky! :D " And after any of this happens, none of the other characters give a crap! They all just reacted with,"Yup, sucks for you...sorry 'bout that...so anyways how about that other thing we have to do....." And she's just kinda like,"Ooh I feel better now." Or maybe,"I still feel kinda upset, but apparently my long-term memory is shot and I won't remember this minutes from now, so I guess I'll just let it go, dum-de-dum tum-tee-tum! :D ...........wait, what was I just thinking about?"

The whole book seemed very immaturely written. In fact, it kinda made me feel like it was written by a Jr. High school kid on drugs rather than a skilled author. A very deranged and perverted kid on drugs, that is. It all had a "what if Twilight and Hannah Montana were turned into a pornographic snuff film with magic spells!" kinda feel. It was done like a very very bad B movie. And not the kind that's fun to watch because of how bad it is. More like the kind where you are left afterwards with this vacant expression saying,"wtf did I just watch?" I feel like I've received the rough draft of the story. I can't believe the author sat down to do a rewrite and actually changed something and we still end up with this. Maybe she just said,"Maybe I'll just have another person smack her around a bit more and then it'll be good!" What in the heck was going through the editor's mind? Could someone please explain this to me?! Can I please go back to before I listened to this book? It was such a simple and innocent time. I think I'll go and scrub my skin until it bleeds, 'cause I don't think I'll ever be clean again.

the story summary sounded great but the reader is awful..... she sounds like a robot, over pronouncing all words and no inflection when reading. wish I could get a refund for this one.

A bad YA novel meets cheap smut romance novel. The writer ruined her story by not having enough people proof read her novel and give constructive feedback to help fix even the most basic of plot holes. The characters never get established personalities. And the narrator sounds like the automatic reader on YouTube videos. She lacks inflection of voice, does not know how to emphasize important words, or do accents (other than a really have French accent). Her voice is naturally higher pitch and makes all of her character voices sound pinched and annoying.

Read by a Robot?

You can't fix the story but you could have picked a better narrator.

What was most disappointing about Terra Harmony’s story?

The pedantic and predictable plotlines.

She lacked any kind of reflection and sounded like she was reading through a tin can.

No. The narrator is very flat and monotonal. Add to that the producer must have slept through the recording because it sounds like it was read inside a tin can. I forced myself to Chapter 3 but couldn't complete the chapter. I tried listening in the car, on the phone, on my computer. There was no escaping that tinny talking into a can sound which, when added to the poor narration, left me very disappointed in the book.

I couldn't tell you. I really was hoping to find a new series to begin and the poor quality of the recording and narration left me with no new lead from this author.

Who would you have cast as narrator instead of Emily Gittelman?

Anyone with a little more experience in how to add life and excitement to a story.

Do you think Water needs a follow-up book? Why or why not?

I most definitely would have liked the opportunity to find out. From what I listened to, it was starting off pretty good.

I will not give up on the book totally. I have visual problems and rely on audiobooks to "read" and when I find a book that totally grabs my interest and is only available in ebook format, I attempt to find someone to read to me. If I can find someone who will read it to me, I will seek out an ebook version of the book.

It sounds like a computer is reading the book.

I actually yelled at the radio to shut up, the reader sucks that bad. Might have been a good story but I couldn't get past how much I wanted to stab myself in the eye when listening to that girl read.

this book had potential except for two things.

first, the narrator, Emily Gittelman, could use a little more practice in reading at a property pace. she pauses in the middle of a thought and runs together two sentences. This makes the story sound poorly written when it is just the narration.

This story could have been good. But authors need to leave out the filth.

I guess I can't read anything anymore

Would you try another book from Terra Harmony and/or Emily Gittelman?

The narrator was a little better then a computer voice.