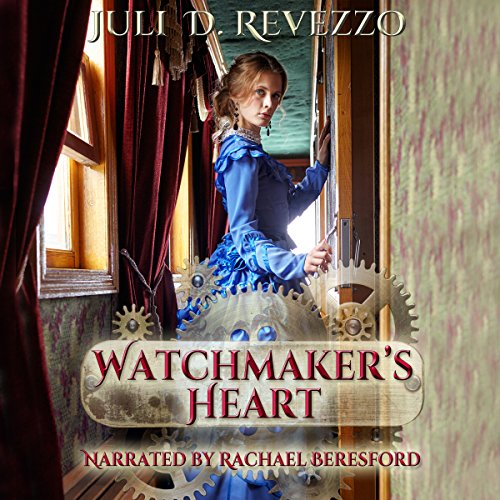 By: Juli D. Revezzo
Narrated by: Rachael Beresford
Try for $0.00

For Miss Phoebe Lockswell, fashionable London tea parties and balls aren't her style. Instead, she prefers to tinker tirelessly with a clockwork diffuser she's built from scratch. If only she can get the invention to work on command, she might earn her way out of an arranged marriage to a repugnant member of the House of Commons.

London watchmaker Mortimer Kidd was brought up hard in the arms of an infamous London gang. Despite the respectability he strives for now, the gang leader is blackmailing him. When Mortimer sees Phoebe's diffuser, he thinks he's found a way to buy himself out of trouble. The brash Phoebe manages to steal his heart, however, before he can purloin her invention.

Will Mortimer's unsavory past catch up to him before he convinces Phoebe of his devotion? Worse, once Phoebe learns the truth, will she ever trust him again?

Watchmaker's Heart is a light, fun Victorian steampunk romance with a spunky heroine!

What listeners say about Watchmaker's Heart

Before I get to the story I want to shout out the narrator Rachael Beresford. She did a spectacular job narrating a story I otherwise may not have gotten into. Her beautiful voice and talent with character differentiation, made the story flow and wish I was still listening even after I was done.

I don't normally put warnings on my reviews, but I read a lot of YA so when I read something that's not for young readers I feel odd recommending it without warning my followers.

Now I need to cravat my warning by saying, This is not Erotica it is very clean considering that a large plot point revolves around the pleasures of love making.

That said, if you have let's say a Victorian sense decency, this book may not be for you, seeing as it's largely about Victorians and their sense of decency, or lack thereof as the case may be.

which brings up another point, this book was billed as Steampunk but the only thing that ran on steam was the train. This could easily be listed as a historical romance without any tweaks and I honestly may have given it more if a pass as I tend to think of steampunk in more science fiction or fantasy terms.

plot summery in a way that makes my cravat understandable: In a world where women have little say in who they sleep with. Phoebe is a tinker trying to invent a device that will enhance the enjoyment of sex. She is a good girl though, and like I said this is a pretty clean book given the topic.

So final evaluation, if you enjoy historical romance and aren't afraid to talk about the facts of life without having then shown to you great detail then this book is for you.

If you want to try something with a steampunk vibe without straying from the believable possiblity of historical technology then this book may also be for you.

What can I say? This book is a bit cozy mystery, a bit steampunk, a bit of a YA- Coming of Age story (even though the protagonist isn't really a teen, but she's just too naive for me to think of her any in any other terms). I generally enjoy any of those genres, or combination of them, but there wasn't enough mystery to titillate me, or steampunk to delight my inner child, and even the coming of age story seemed tepid. I felt that there just wasn't enough character development to carry or propel the story forward, or maybe, to ummm... support my suspension of disbelief. I went ahead and finished the book because it was actually kinda cute, even though the ending was a forgone conclusion.
Rachael Bersford neither added to, nor distracted from, the listening process...
Soooooo, I'm giving it 2.5⭐out of 5.

The Watchmaker’s Heart by Juli D. Revezzo is historical romance with steampunk elements and a nice bit of suspenseful mystery. Penelope “Phoebe” Lockswell is a bit of a tinkering and has created a somewhat scandalous diffuser. I enjoyed this feisty heroine, and Revezzo quickly pulled me into this tale.

Poor Phoebe is nothing like her peers and prefers tinkering with her creations much to her parent’s horror. Determined to set her on the straight and narrow they are encouraging a marriage with a man, dear reader who makes Phoebe shiver and cringe. I am inclined to agree with her.

Not to be deterred she sneaks off by train to attend a convention and share her diffuser. Being a young lady unescorted let alone attending such a conference was rather scandalous and when she spies a reporter on the train, she seeks to hide. Here she encounters, London watchmaker, Mortimer Kidd. Mortimer has gotten himself into some trouble with the local gangs of London and at first, seeks to strip Phoebe of her diffuser, but as they strike up a conversation all that changes.

The tale that unfolds was an engaging one, as Phoebe tries to avoid Sir Dugard, the ghastly man her parents wish for her to marry and spend time with the exciting watchmaker, Mortimer, who seems to see the value of Phoebe’s diffuser as he helps her tinker with the gadget. A friendship soon develops, as do warm, romantic feelings, but Mortimer isn’t for the likes of Lady Phoebe, and his secrets might put them both in peril.

Revezzo did a fantastic job of taking classic Victorian storyline plots and making them her own. She weaved in steampunk, mystery, and suspense all while entertaining us with a forward speaking young heroine whose outlandish ideas about romance, sex and more shock her parents and bewitch Mortimer.

The audio narration by Rachael Beresford had some issues. While Beresford did a splendid job, the quality of the track left something to be desired. I was rather surprised at the background noise, particularly at the end of each chapter. It almost sounded like the noise the needle makes at the end of an album. While I am sure this is an editing issue, it did deter from my overall enjoyment of the narration. I would recommend reading this tale if such matters annoy you. Noise aside, I felt Beresford captured Phoebe’s spirit and gave each character a voice befitting their description.

I’m remember when I was first hesitant to read steampunk books, because I don’t know much about them. If you want to experience the genre, I suggest checking this WATCHMAKER’S HEART. This is a great introduction to steampunk and Victorian romance.

The dialogue was quick and witty, the characters quirky and mysterious. The novel was overall light and fast-paced. I loved the world that Revezzo created and the way she managed to write such a fun story within a historical context. She set a good foundation for the setting and provided interesting character interactions when there wasn’t action.

Penelope “Phoebe” Lockswell is an incredible character with her independence and determination to stick by her principles. It’s obvious she doesn’t fit in with the time she has been born into, but she doesn’t let that stop her creativity and dreams. I enjoyed seeing the relationship between her and Mortimer slowly form from stranger to lovers; a great slow burn romance, indeed. Their relationship is really a solid partnership that comes naturally to them.

The audio was fabulous with a narrator who nailed every character down to a tee. She brought the story to life for me and made it fun to listen along from start to finish.

&quot;I was provided an audio copy of this book from the author via The New Adult Group on Goodreads at no charge, for my unbiased review.&quot;

The narration is very soothing. The book is about Phoebe a young inventor and her creation could be in the steampunk world. Phoebe's father was trying to arrange a marriage for her...but Phoebe is interested in Mort. I was given an ARC copy for a voluntary, honest review.