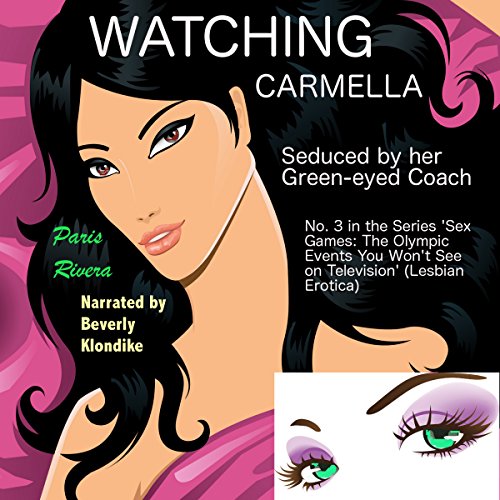 Watching Carmella tells what happens when green-eyed Coach Hernandez is charged with being chaperone to the gorgeous, young Latin hockey star Carmella.

Carmella and Milana's biggest mistake, when they eventually awaken, is to head back to their room together. They have missed the morning team meeting for the Uruguayan Olympic field hockey team, and when Coach Gloria Hernandez spots them together, she puts two and two together.

Both young women look exhausted, and they have not even showered! They are certainly too tired to play in the match against Japan that day. Angry and indignant, Coach Hernandez announces they will be fined the equivalent of $2,000 each ,and she would be moving into Carmella's room that evening. "If the mice are going to play," as she puts it, "then the cat cannot afford to stay away!"

Carmella, 20, acceptesthese disciplinary measures without complaint. Later, confined to her room, she finds out that Uruguay has lost their qualifying game that day, and she knows that the absence of Milana, 28, and herself damaged the team. All she wants to do now is get some sleep and try to make things up to her teammates in the following game. So it is with some relief that Carmella retires to bed at eight o'clock, sure in the knowledge that Milana's subversive and exciting influence has been forcibly removed, with Coach Hernandez standing guard like some kind of old-fashioned chaperone.

Yet for some reason, Carmella wakes in the night and opens her eyes. Immediately she shuts them tight! She cannot quite believe what she has seen.

Across the room Coach Hernandez is lying wide awake in her bed, her large eyes staring intently at Carmella!

Another great fantasy comes to your ears with Paris Rivera’s Watching Carrmella- she really knows how to pen the steam and capture the moments for you to enjoy! ⭐️⭐️⭐️⭐️✨❤️🎧❤️

Milana and Carmella get themselves into quite a mess. it means Carmella will now be watched over by her coach. Personally!
A coach so good you'll want her to be yours! Personal, and in control. What more could any young woman want? Maybe the opportunity to be coached into a release.
You can almost feel the stare, and find a sense of admiration , when those eyes are looking straight into yours. it is an absolute Must-read!!

Would you listen to Watching Carmella again? Why?

I listened to it twice, but the narration isn't that great. I would read the ebook it again though.

What was one of the most memorable moments of Watching Carmella?

There was a mention of a hot dog slipping between two buns that made me giggle a bit.

No. The narrator seemed like she was reading slowly to sound sexy, but it came out too forced and brought the story to a crawl.

I love "The Olympic Events You Won't See on Television" that the author used. It's perfect.

Paris has such a talent in writing hot and sexy scenes. This book has no touching between the two characters for the most part but melt my panties off it is as hot as any sex scene I’ve read where they are all over each other! Great writing Paris, keep them coming!!