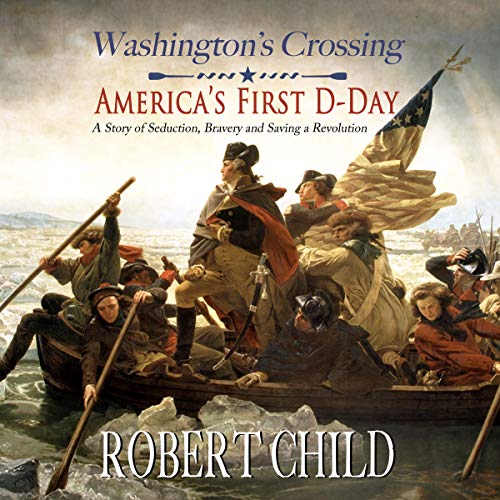 By: Robert Child
Narrated by: Fred Kennedy
Free with a 30-day trial

A story of bravery, seduction and saving a revolution - George Washington's finest hour.

Our first President is often remembered as a humble, grey wigged, elder statesman. But by the end of 1776 the American Revolution almost came to an end. General Washington made a bold move that saved the American cause. The Continental Army Crossed the Delaware River on Christmas Day to attack the Hessians in Trenton. This was America's First D-day.

In a clear concise narrative this audiobook transports you back to the early days of this nation when America's future hung in the balance.

The book Highlights little known facts about the Crossing including that the Marbleheaders saved the Revolution twice, once in New York and once again crossing the Delaware River. A beautiful widow seduced a British Colonel for three days preventing reinforcements from arriving in Trenton. A leader of a loyalist gang swam across the Delaware river on Christmas Eve to warn the Hessians that Washington was planning to attack Trenton. Three different crossings were attempted on Christmas Day and only Washington's group made it, the other two crossings had to turn back due to severe weather. Washington used a network of spies to insure a successful surprise attack. If the attack on Trenton was not successful the American Revolution would have come to an end.
©2013 Robert Child (P)2013 Rob Child & Assoc, LLC

What listeners say about Washington's Crossing

book is a scam, not the book you think your buying


I could have written this book, its nothing then a essay and not the full book you think your buying.